That time I forgot Passover and a mini miracle 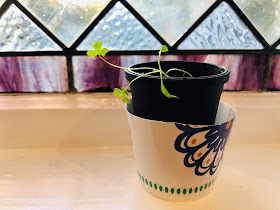 Technically, I didn't forget all of Passover. I cleaned the house. Ordered food from a local caterer (win-win—I wasn't up for cooking and I supported a local business). Set the table last night for our seder, the traditional Passover meal. And then I realized: I had basically forgotten to plan for the seder plate, the centerpiece of the whole dinner. I've never done that in my entire life. But this year, everything is upside down and out of order and just plain surreal.

The seder plate is a collection of six foods that symbolize the story of Passover, this is what a traditional one looks like. 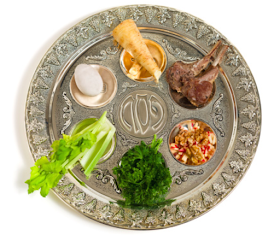 There's a green vegetable (karpas) that commemorates how the Jewish people flourished during their first years in Egypt and spring, when Passover is celebrated. It's dipped into salt water for the tears shed during slavery.

There's a sweet paste made of apple, nuts and spices (haroset) that recalls the mortar used to construct buildings for Pharaoh.

There's a bitter herb (maror), usually horseradish, for the bitterness of slavery.

And there's a hardboiled egg (beitzah) for the holiday sacrifice that also symbolizes the the cycle of life, and how even in the hardest times, there is hope for a new beginning—and how apropos is that right now?

Weeks ago when I put in the order for our meal, I had the presence of mind to get a shankbone. After that, kaploeey went my brain. Now, I had to figure something out, stat.

Hardboiled egg, not a problem. I mushed apples and nuts together for haroset. Bitter herbs...hmm...well, we did have this tube of ginger paste and I personally can't stand the stuff so that would work for a bitter-rific substance. Second bitter herb: scallion shoots left over from a rice dish for the win. But I got stuck on the karpas, the green vegetable. We didn't have any.

I stood in the kitchen as the sun poured in, considering putting out a call to neighbors. My eyes fell on our windowsill and the little plant Ben's teacher had handed me when I picked him up from preschool on the day it shut down—parsley the kids were growing for the seder plate. Ohhhhh! But I hadn't remembered to remind him to water it often. I took a look. It was still hanging in there, and it seemed like there would be enough for the second seder, too.

Chanukah is the holiday when the oil that was supposed to keep the temple candelabra burning for one night lasted for eight, but here was my Passover miracle: a baby parsley plant that would last for two seders. Well, that and the fact that there was no drama at the seder, other than Ben's meltdown when I served Max soup first instead of him. We sat outside on our deck, read the story of Passover, dipped sprigs of parsley (Ben, proudly: "I MADE THAT!!!")  in salt water, enjoyed the beef brisket and roasted vegetables and potato kugel (carb heaven, look it up), sang songs and celebrated the holiday in a spring when we so needed the comfort and familiarity of tradition. 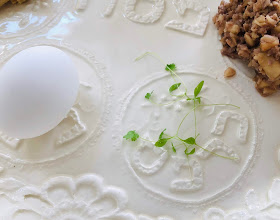