The story of our disinfecting wipes spy-angel 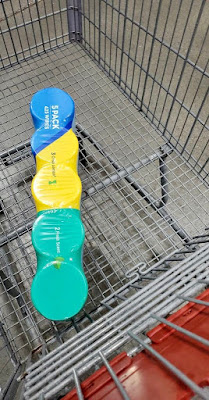 If there's any goodness coming out of this whole coronavirus nightmare, it's people looking out for each other. Neighbors post in our local Facebook group asking if anyone needs anything at the grocery store. (Shout out to Matt, who snagged Trader Joe's mac 'n cheese yesterday, a Max staple.) People are donating protective supplies to pediatricians and doctors, crafters are making masks. There are win-win fundraisers happening in our area which people donate to local restaurants and they provide meals for hospital staffers working the front lines of the coronavirus war.

Our family is the lucky beneficiary of some Costco kindness. The story begins with a balance bike of Ben's that I posted on our local Facebook swap group the other week. A bunch of people responded and I went with the first one, a lady in a neighboring town who offered to come pick up the bike the next day. She messaged me that morning to say she couldn't stop by until later because her husband works at Costco and they had asked him to extend his hours.

COSTCO?! HE WORKED AT COSTCO?! I'D FOUND A CONNECTION AT COSTCO?

We were well aware that stock was running low there; friends who had made the trek had posted photos on Facebook of the bare towel paper and t.p. shelves. In our eagerness to keep Bad Germs from spreading, we've been using paper towels to dry our hands instead of fabric hand towels—they're more sanitary. We knew that the situation was ramping up here and that we wouldn't want to leave the house to get anything for a while.

And so, I decided to get some intelligence and I asked this stranger if she knew what our best shot was at getting paper towels. She immediately responded, and told me to get to the store around 8:15, grab a parking spot where we could see the front door and get in line as soon as one started. "It's crazy there every day," she said, "but you can be the first ones there." Also, she added, "expect people to be running with carts as soon as they get past the checking of memberships."

Whoa. We didn't have time to train for The Costco Olympics. Also, was it worth the risk of going to the store? Maybe, if they had disinfecting wipes. So I asked if the store had those. She said no, then kindly offered to keep us in mind if a truck came in. I thanked her.

And then, this lovely woman showed up to grab the bike and handed over a canister of wipes. She refused to accept any payment. I thanked her profusely. Never in my life would I have thought that a canister of Clorox disinfecrting wipes could bring me to tears.

Last Thursday at 7:09 a.m., she messaged me to say Costco had gotten Clorox wipes. Dave had to get there at 8 a.m. They were only letting fifty people into the store. There was a limit of one package per person. They were by the front register. She shared a photo of where the wipes were, zapped to her by her husband.

Once again, I told her how grateful I was, noting that our exchanges were straight out of a spy movie. Dave dashed out of the house, ended up being the fourteenth person in line, waited more or less patiently, ran-not-walked in when the doors opened and scored a package of wipes. He instantly sent me a photo of them, so excited was he. A five pack! I shared the pic with my Costco spy/angel.

"You developed a great mission and Dad executed it well," she said.

I told her he'd be receiving the Costco Bravery Award when he returned home and that someday, when this had all ended, I'd like to thank her in person. Dave passed the good vibes along and gave a canister of wipes to our babysitter.

Things may be bad out there, but there is also a spirit of kindness, goodness and generosity in the air. I'm taking comfort in that.
Ellen Seidman at 1:36 PM