It's not easy finding ways to fill the time 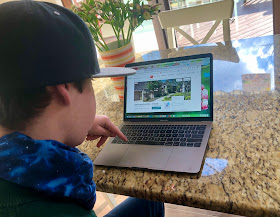 Max spent a chunk of the weekend browsing Trulia and Zillow on my computer, specifically, offerings in Los Angeles. The $4,999,999 mansion he chose is a bargain, given that it's been marked down from $5,199,999.

"I want to move to Los Angeles!" he announced. (Favorite phrase No. 1.)

"It's disgusting here!" he continued. (Favorite phrase No. 2.)

Max is equally happy to make lists on his iPad about what he likes to do in L.A. (hang with Dave's friends, eat steak, go to Disneyland, eat In 'N Out Burger, drive around, eat mac 'n cheese at his favorite café, eat some more). I'm glad he's found something engaging that also involves writing or  learning to navigate a website. It beats those times when he sits in front of the TV and browses YouTube videos of fire stations and cruise ships. I can hear the Princess Cruise Love Boat horn in my dreams.

Entertaining Max at home has never been easy. As a kid, he wasn't one to play with toys alone because he needed a hand, as it was hard for him to grasp stuff, push buttons or focus. Floor time often felt like a chore because I felt compelled to make playing as therapeutic as possible. Floor time could also get me down, because it made it clear just how significant Max's fine-motor skills were.

As a teen, Max likes electronic devices (you know: teen!), but obviously there's a limit. Which we, er, mostly enforce. Max doesn't talk on the phone with friends, although he likes chatting with family. He reads, but is not into reading books or magazines, even ones about L.A. (I've tried). He does occasional chores, like taking laundry out of the washer and putting it into the dryer. He can work on homework independently, which is amazing, and smetimes he uses the homework practice site IXL. But in general, there's not much that he's into doing inside the house, which explains why he's regularly out "galavanting" with Dave, as Dave likes to say.

It will be easier once the weather's warmer, when Max likes to chill on our front porch and say hello to neighbors or take walks. But for now, I'm cool with letting him roam around real estate sites and fantasize about his future home. I think it counts as a hobby?! Whatever! As is often true of parenthood, whatever works, works.
Ellen Seidman at 9:34 AM