The sad, sordid tale of the rubber duck and the toilet 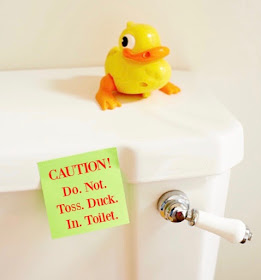 One great thing about having a third kid spaced 11 years apart from your second kid is that you act and feel like new parents.

One bad thing about having a third kid spaced 11 years apart from your second kid is that you act and feel like new parents.

Which kind of explains how a mini rubber duck sabotaged our toilet and bank account this weekend. I'd thought that, by the age of 4, Ben was past the stage of tossing random objects down the toilet. It had been one of his favorite activities a couple of years ago, and various toys, clothing and an iPhone had all fallen victim. But now, he was a big boy! 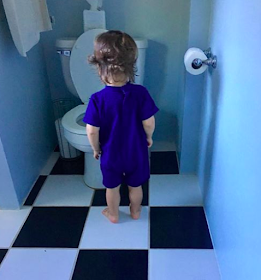 Portrait of a toilet tosser at age 2

On Sunday, Sabrina was upstairs "watching" Ben when all of a sudden I heard her shout "OH NOOOOOOOOOO, BEN!!!" That did not sound the least bit good. I ran upstairs. Some backstory: a A couple of weeks ago, we'd had brunch at Sugar Factory, a trendy restaurant in New York, with out-of-town friends. It was a total disaster—mediocre food that was served cold and exceptionally slow service. The only win from the meal was a mini rubber duck that came with Ben's rainbow burgers. Oh, that duck was so cute!

Well, Ben had taken that cute duck and flushed it down our toilet. And because it was a li'l guy, it had actually gone down the toilet.

The Rubber Duck Terminator stood there, looking all innocent.

"Bennnnnny, why'd you do that?" I asked.

"He was learning to swim!" Ben explained.

I posted about the situation on my local Facebook group. People noted there was a chance I could extract the duck by snaking it, as I actually own an auger. No such luck. I googled and found a thread on some random homebuilder board where a guy had said he'd used a wet-dry vacuum to suction a rubber ball out of a toilet. So I got out our trustworthy wet-dry vacuum, pulled off the rubber at the tip and sucked. Nope. The next step was to unbolt the toilet and look at the base, but the bolts refused to unscrew.

The whole time, I had that Sesame Street song in my head—you know, the one Ernie sings:

Rubber duckie, you're the one
You make bathtime lots of fun

The thing was, that toilet was about 30 years old. I'd been waiting to get a new one until we did a bath reno. But I realized that I could call in a sewer guy to get him to fish out the duck, take out the old toilet, put in a new one and snake our house drain while he was at it, long overdue. So I booked one for Monday, when I was off work. Then I called a local plumbing supply place on Sunday to get a toilet, and they said they would actually deliver it by Monday. I just love it when a toilet can show up on your doorstep just like pizza.

Ben, meanwhile, had other pressing matters on the brain: "Mommy! Is the duck OK?"

On Monday morning, the sewer guy showed up. Only the water shut-off valve in our bathroom wouldn't budge so he had to saw the whole thing out of the dry-wall. Woo hoo! More to fix! Finally the old toilet was off. We'd thought the rubber duck would be lodged in the drain below but, no—it was actually stuck in the toilet base. The plumber poked a camera up there so Ben could see for himself.

"Can you get it?" Ben asked, in his most charming voice.

"Let's not, it's pretty disgusting!" I said.

"OK, Mommy, we can go to the restaurant and get a new one," he decided.

One thousand bucks later, making that the most expensive bad brunch in the history of bad brunches, we are the proud owners of a shiny new duck-less toilet. I am the not-new parent who's had to have a little discussion with my kid about not throwing anything down there again, other than t.p. He promised he wouldn't. Um.
Ellen Seidman at 9:53 AM