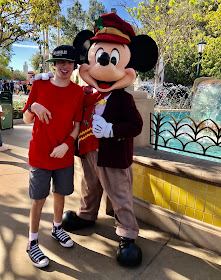 Five years ago, Disney theme parks changed their policy toward people with disability and access to rides and attractions. This was mainly due to abuse of the passes that allowed people with disabilities to move to the front of the line (scams included families hiring tour guides who had disability passes). Instead, Disney instituted the Disability Access Service Card system. We've used it a couple of times, most recently during our trip to Disneyland in December. Basically, you go to a kiosk and they give you a designated time to get on a ride. Once you arrive, you enter through the FastPass entrance or the accessible one. Sometimes this still involved waiting in a line, although Max tolerated it OK.

The new system upset a lot of parents and people with disabilities, including an autistic man in Orange County, Florida known as "A.L." who five years ago filed a lawsuit against Disney. The trial finally started yesterday, reports Disability Scoop, and is scheduled to last until the end of the week. The lawyer represents other families in Florida and California who've filed similar lawsuits.

Assigning people a time to go on a ride is a problem, the lawsuit notes, because not having a definitive schedule can cause stress and meltdowns for people with autism. A.L. had a very specific routine at the Magic Kingdom, per the Orlando Sentinel, one that may be familiar to parents of children with autism—he traveled "in only one direction, stopping at only the same places, in the same order, every time."

While the lawsuit is focused on individuals with autism, a reserved wait time can be an issue for any child with sensory issues or physical challenges. Max's sensory issues have largely subsided but when he was younger, it was impossible to know for sure what rides he would and wouldn't go on. He'd say OK, but then freak out when we got to the ride we were signed up for. Traipsing around made him get even more tired—for a child with cerebral palsy who can walk, theme parks can be especially exhausting. We've often ended up getting Max a wheelchair.

The stress and strenuousness of theme park visits for families of kids with disabilities is hard for some people to understand. Yes, these places are magical to our children of all ages and of course, they do want to be there. They've dreamed of it. But the physical and psychological realities of navigating the parks are part of the deal. Standing around in the hot sun while your child cries and screeches inconsolably as people around you gape makes it the unhappiest place on earth.

If Disney loses the lawsuit, people with disability access passes will once again be directed to the front of the line. Which is only right and fair. The truth is, unethical people will abuse the disability pass system in whatever form it exists. Making entrances to rides and attractions as simple as possible for people with disabilities should be the bottom line. Accessibility wins.
Ellen Seidman at 9:30 AM