When you and your partner disagree about disability 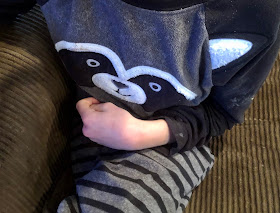 Every family has phrases that are on auto-play. Ones heard frequently at our house include "Get off your phone, now!" and "What's that smell?" and "Can we order in dinner tonight?" and "Thumbs, Max, thumbs!"

The latter is a reminder to Max to stop tucking his thumbs into his fist, otherwise known as "cortical thumb" or "clasped thumb." This is how his hands often look in repose, unless he makes a conscientious effort to relax his fingers. Dave is always the one to say "Thumbs, Max, thumbs!" Me, I don't bother.

For years, Max wore Benik neoprene hand splints to keep his thumbs open and unfisted. While they did the job, when he got older he wasn't into them and we didn't force them on him.When Max needs to open his fingers—to grasp a pencil, to pick up a spoon—he does. I am grateful that he has the ability to do that. It took years of determination and occupational therapy sessions for him to have some control over his hands. When you have cerebral palsy, your brain can have trouble sending movement signals to your muscles.

Dave notices the thumbs. "I just want his thumbs to be straight," he'll say, by way of explanation. I think part of him doesn't want Max to look different, although it's not like Dave doesn't accept Max for who he is. He is Max's best friend in the whole wide world, and the two of them are always out "galavanting," as Dave likes to say, whether they're getting foot massages or trying a new dim sum place. Dave is the one who brings Max to Home Depot to roam around. Next week, Dave has work to do in Los Angeles and Max has winter break, so Dave cashed in air miles and the two of them are headed there.

I've never said anything to Dave about his "thumbs, Max, thumbs" prompts, so we basically have a passive disagreement about this. We are generally on the same page about parenting and helping Max physically progress. From the start, we were determined to get him as much therapy as possible, to do exercises with him at home (er, mostly), to try alternative therapies and treatments (Max got stem cell therapy when he was six), to find gadgets that would enable him whether it was a gripper for our phone at home or cups with handles he can grasp. We're gleeful about his achievements, whether he's opening the car door on his own or tossing a basketball.

There's not much we nudge Max about in terms of his physical movements these days—mostly, we're working on standing upright when he climbs our stairs rather than clambering up on his hands and knees and encouraging him to dress himself as best he can. So if Dave wants to remind him to relax his thumbs, that's cool with me. It doesn't seem to bug Max.

Years ago, Dave and I were both obsessed with Max's hands. I remember going to the mall when Max was an infant and checking out the hands of every single baby we passed. Were their little hands fisted, like his were? We knew that spasticity was a sign of cerebral palsy, and we were scared that Max would be diagnosed with it. We got excited—yes, excited—when we spotted babies with fisted hands. But infants do that, and grow out of it. Max never did.

If only we'd known then that CP would not define Max. Yes, it can limit his movements, but he has  workarounds along with a "whatever I can do, I can do" attitude. He functions in his own way.

When Dave asks, Max unclasps his thumbs. And then, when Max isn't thinking about it, the spasticity kicks in again and they'll move back inside his fists. He's comfortable that way. He loosens up his thumbs as is necessary. Maybe someday he'll be more aware of his thumbs and care. But for now, he doesn't. And that's just the way it is.
Ellen Seidman at 10:42 AM