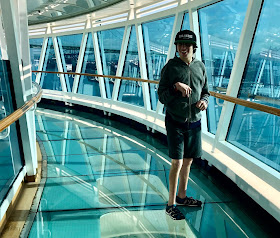 One of my guilty pleasures as a mom is spying on my kids. By that I mean, seeing how they act when they don't know I'm around. In recent history I've enjoyed watching Ben playing in preschool as I peeked through the door to his class, Sabrina face-timing with a friend at our kitchen table and Max chilling in the teen club of the cruise we were on.

We weren't totally sure how that would work out—the teen center doesn't have a check-in policy, and teens come and go as they please. I'd spoken with them in advance about Max and they were game to keep an eye on him and page us anytime he needed a hand.

We got to the point where Max was able to get to and from our room to the teen center and vice versa by himself (he had a cruise digital wristband that enabled us to know where he was). Max has an amazing sense of direction, but this was a giant independent step. Staffers told us that he was playing a lot of video games and also enjoying skeeball and air hockey with other teens hanging at the center.

One afternoon, I stopped by the ship's buffet to grab lunch and spotted Max standing with a group of teens by a food station. I ducked behind a pole so he wouldn't see me, and I watched. I felt a stab of anxiety—if they were there to grab food, Max would need a hand with that. But the teens stood there, not much talking with Max. He started tapping on his Apple watch, likely texting Dave.

I didn't know what was going on, but I was sad that the teens weren't talking with Max. He, however, did not seem to care much and was doing what many teens do when they need to occupy themselves: look at their mobile device.

I ached to go over to him. But I held back, and went off to grab some salad and cheese. For one, I didn't want Max to know I was watching him and I didn't want to embarrass him. But I also knew that he needed to learn to navigate social situations on his own.

As I rounded a corner, though, there was Max and the teens again. He saw me and waved hello, and I casually walked over. One of the teens explained that they were on a scavenger hunt. Ah, so they hadn't actually been eating, just looking for items on a list. While I'd wished they'd found a way to better include Max, this was nothing I could control.

One of the toughest parts of having a teen with disabilities is realizing that you won't always be there to help them—and accepting that in letting them handle things on their own, you actually are helping them.

My heart has trouble hearing that. My head, it understands.

"Great! See you later!" I said, and walked away.

When I turned back to look one last time—I am weak, so weak—Max was staring at me with a grin on his face, because he knew I was going to do it.
Ellen Seidman at 6:30 AM