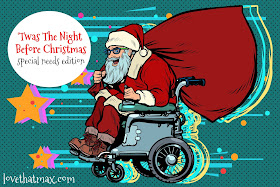 The stockings were hung with care by the chimney
A truly awesome fine-motor-skills activity
Maybe next year I'll grasp
The figurines in the toy holiday nativity?

Some children snuggled with weighted blankets in their beds
While visions of gluten-free sugar plums danced in their heads
And I, decked out in my noise-blocking headphones
Had just settled into a very chill zone

When out on the lawn there arose such a clatter
I grabbed my orthotics to see what was the matter
Away to the window I trotted on the floor
Tore open the shutters—a range-of-motion score!

The moon shined on the snow—dare I tread?
Come to think of it, I deserve an adaptive sled!
When what to my wondering eyes did appear
But an accessible sleigh and eight tiny reindeer

With a little old driver, so full of bilateral coordination and quick
I knew in a moment it must be St. Nick
More rapid than a gait trainer his coursers they came
And he articulated vowels and consonants and called them by name:

As dry leaves that before the wild hurricane fly,
When they met an obstacle, like any kid with disabilities, they did try
So up to the house clutching their fidgets they flew
With the sleigh full of developmental toys, and St. Nicholas, too

Then faster than you can say "Reimburse me, insurance company!"  I heard on the roof
The prancing and pawing of each little hoof
As I drew in my head, and crossed midline to turn around
Down the chimney St. Nicholas came with a bound

He was dress'd all in tagless clothing from his head to his foot
And his clothes were all tarnish'd with shaving cream (sensory play!) and soot
A bundle of enabling toys was flung on his back
And he looked like a pediatric therapist just opening his pack

His eyes—how they twinkled!—his dimples, how merry
His motor planning was decent after a bazillion sessions of physical therapy
His little mouth, thanks to oral-motor exercises, was drawn up like a bow
And the beard of his chin was as white as the snow

He was curvy and well coordinated, a right jolly old elf
And I laughed when I saw him, in spite of myself
A wink of his eye and flexion of his head
Soon gave me to know I had nothing to dread (except those therapy bills)

He spoke not a word, but went straight to his work
Filled all the stockings using a pincer grasp, then turned with a jerk
And laying an isolated finger (woo hoo!) aside of his nose
He gave a nonverbal communication cue and up the chimney he rose

He sprang to his sleigh, and his team did their breath exercises then gave a whistle
And away they flew like the down of a thistle
But I heard him exclaim, 'ere he drove out of sight
Happy Christmas to children of all abilities, and to all a good night!
Ellen Seidman at 7:53 AM