The choking scare and the responsibility we parents shoulder 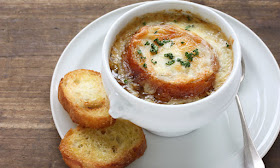 I took Max and Ben to a diner for dinner the other night. Sabrina was out with a friend and Dave was away on business, so it was just me and the boys. We settled into a booth and by that I mean, Max and may sat down and Ben crawled under the table to play with his cars. Max wanted to do Thanksgiving in December, so he got turkey and gravy, with a French Onion soup for starters, his fave.

While Dave still tends to help feed Max at mealtimes, I won't because Max is capable of doing it. When the soup arrived, I asked for a steak knife. After I cut up the gloppy cheese on top, Max dug in. Ben darted to another booth—the restaurant was pretty empty—and I got distracted asking him to quit jumping on the cushions. Suddenly, Max started gagging and coughing. It looked like he was choking.

I started whacking his back. "Max, are you OK?" I asked. "Tell me you're OK." If a person is able to talk when they are choking, or laugh or cry, it means the situation is mild and they should be able to clear out the blockage on their own. If not, their airway is completely blocked and you need to act quickly.

I was about to open Max's mouth to see if I could extract whatever the obstruction was when Max eked out "I'm OK!" With a few last coughs and big swallows, he calmed down. We talked more when he was able to and he said he had swallowed a big piece of cheese. Usually Max is pretty good about assessing this sort of thing, but it dawned on me that melted cheese can be deceptive—it may look mushy but there's a real danger of it getting stuck in your trachea. I know this applies to string cheese, but I'd never thought about melted cheese on soup.

I grabbed the soup bowl to make sure there were no other large chunks of cheese and Max continued to happily eat. I was shaken to the core. Parenthood is a whole lot of responsibility on your shoulders, but at times, the job of keeping Max safe weighs on me. While we are the parents of a child who is not medically fragile, it is all relative. Making sure that Max doesn't choke (cerebral palsy can cause isues with chewing and swallowing); stays well rested and gets a one-two punch of ibuprofen ASAP when he has fever (fatigue and fever can trigger seizures); takes his anti-seizure meds twice a day; doesn't tumble down stairs; and watches out for himself  and cars when he takes the occasional walk alone around our neighborhood are tremendous responsibilities. Ditto for making sure people in his life are aware of all this.

While Max's maturity has meant that he, too, can play a role in his safety (he will remind us when he needs his meds, for example), at times we have to keep an eye on him in ways that parents of young children do. Now that Max is seventeen, I sometimes forget that.

If I think too much about the care and attention Max needs, it's overwhelming. And so, as I've always done, I take life day by day. That doesn't mean I'm never pondering the future, like what sort of job might work well for Max or where he might live. It means focusing on doing the best to enable him and empower him in the moment—and feeling good about the effort, even if it isn't always a success. Sometimes, not pondering the big picture is a good thing.

When Dave and I were catching up last night, he mentioned that when he and Max had gone out to eat that day,  Max had French onion soup again.

For sure, spoon-feeding Max is one way to make sure he stays safe from choking. But that also impacts his independence, something Dave and I continue to navigate. Max's fondness for French onion soup isn't going away anytime soon. We'll just have to keep an eye on the cheese and keep right on taking life, day by day.