A speech therapist teaches her dog to talk 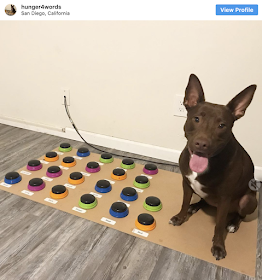 If you have a child with disabilities who uses a communication device or you're a speech therapist, then you know just how game-changing they can be. Christina Hunger, a speech language pathologist in San Diego, California, is making news with another communication breakthrough: she has taught her dog, Stella, to communicate in sentences using a soundboard. As she mused when she first started, "If dogs can understand words we say to them, shouldn't they be able to say words to us?" 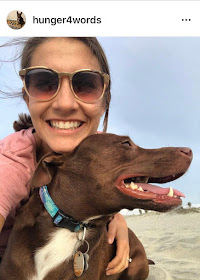 Christina and her fiancé, Jake, began by programming a recordable buzzer to say "outside," and they'd tap it before opening the door. Soon, when Christina said, "Outside? Stella, want to go outside?" Stella would looking at the button. Then Stella started paw-ing it herself. Within months, she was putting together words.


The couple programmed more buttons—eat, no, come, help, love you. Christina taught Stella words, just like she did in speech therapy sessions with the young children she worked with. She didn't reward Stella with treats; she acknowledge what she'd said and responded.

Here's Stella, asking for a walk to the park. Like, now.


Stella has learned to ask for water. If she wants to play tug of war, she'll press "play." She'll say "bye" if visitors put on jackets by the door. And if she was bummed that Christina was headed out to work? Well, this:


It's gotten to the point where Stella is able to let Christina know that Jake has shown up at the house, after hearing his car beep.


Christina's Insta account and blog are full of encouraging words about augmentative and alternative communication. I'm glad she's making AAC buzzy. Strangers are often amazed when Max uses his iPad speech app (TouchChat with WordPower)—a device that can speak words is still a novel thing. It's also still surprising to people to know just how much someone with a disability may have going in inside their brains. The more others can better understand the ways in which AAC opens up worlds, the more inclusive our world will be.
Ellen Seidman at 6:50 AM