The potential of people with intellectual disability: Watch this documentary 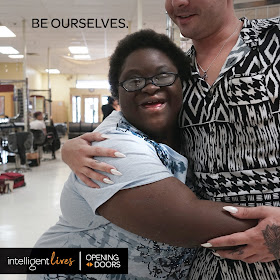 As the mom of a teen with intellectual disability, I know just how bright Max is and how much potential he has. Unfortunately, not everyone sees that. People with ID are haunted by stigma and old-school attitudes and a culture that places undue importance on IQ scores. Yet given the right support, people with ID can be included in education, employment and relationships and thrive, as disability rights filmmaker Dan Habib shows in his acclaimed documentary INTELLIGENT LIVES. It will be broadcast on public TV for the first time on Tuesday October 22 on the WORLDChannel series AmericaReFramed, at 8 pm ET / 7 CT/ 9 PT (find your local PBS channel here).

Dan is dad to Samuel, who has cerebral palsy (you may recall his first film, Including Samuel). His latest film is narrated by actor Chris Cooper, whose son Jesse had CP. INTELLIGENT LIVES follows young adults: There's Naieer Shaheed, an artistically gifted high-schooler who has autism; Micah Fialka-Feldman, an outgoing guy who attends InclusionU at Syracuse University; and Naomie Monplaisir, a cheerful young woman trying to find a job. 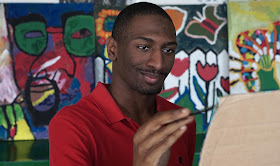 Naieer painting (two of his prints—Sunflower Blue and Malcom X—are for sale at intelligentlives.org, and all proceeds benefit the art program at his high school)

The documentary makes it clear that IQ testing does not reveal much about a person's abilities, talents or potential, and asks society to broaden its perspective of what "intelligence" means. I found myself getting emotional as I watched it because I've been down this road many times. 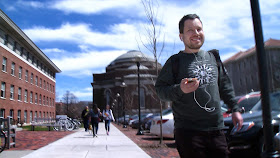 I particularly appreciated the scene in which Micah is advised by friends not to discuss politics when he visits the home of a girl he's into. Her dad ends up asking Micah who he wants to be president, and Micah hems and haws. It's possible the girls' parents assumed he didn't get the question, but Micah prudently responds, "I'm going to think about it, I'm not sure yet." As he drives home and talks about the girl, he notes, "I just want to make sure that she knows how to advocate for herself." Now that's intelligence. 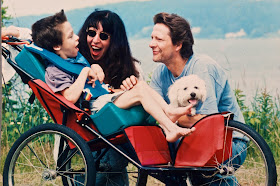 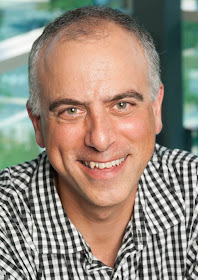 I had the opportunity to ask Dan a few questions.

What do you hope this film achieves when people see it on public TV??

I love the medium of documentary film because I get to take people deep into the lives of these trailblazers that they might otherwise never meet. Many young adults, families, and educators are unaware that students with intellectual disability are being fully included in high school and college in hundreds of schools across the United States. Employers may not know that people like Naomie, Naieer and Micah can thrive in the workplace. I hope INTELLIGENT LIVES shows viewers the power of opportunity and high expectations.

The central premise of the film is posed early by Chris Cooper. He asks, “Can any attempt to measure intelligence predict a person’s value, or ability to contribute meaningfully to the world?”  If viewers examine that question, I think the film will raise expectations for people with intellectual disabilities —throughout our society.

I also hope that students and families learn that IQ testing does more harm than good. I understand that IQ testing is intended to be just one tool in an overall assessment process that includes many other qualities and measures, like adaptive behavior. But I speak with hundreds of families and educators all over the country and their experience is that the IQ score is the measure that carries more weight than any other. A few points on the score can be the difference between segregated education or inclusive education. Imagine your whole educational path being determined by a couple of points on an IQ score!

It has a big impact on adults as well. A family in Pennsylvania told me that their son—who has cerebral palsy, is a prolific communicator through eye gaze AAC technology and goes to college— must have a note signed from his doctor every year that his IQ is below 72 in order to continue to maintain his adult services. There are better alternatives for determining service eligibility, like the Supports Intensity Scale (as long as—like any tool—it is implemented properly).

Can you share some of the ways you've seen this film change perceptions of people with ID?

We also collect anecdotal examples of impact from film screenings. One moment stands out. Film “star” Naieer was part of the post-film panel at the premiere in my hometown, Concord, NH. Naieer, who has ASD, stood before 500 people in an elegant performing arts center working so hard to answer questions. At one point, for a full minute, the entire audience waited for him to give his answer in a tightly constructed sentence. I don’t honestly remember what he said. What I remember was the unconditional feeling in that room that whatever Naieer had to say was worth waiting for. And that it was not Naieer’s problem that he had trouble getting the words out—it was society’s problem that we are typically so impatient in our communication. Oh, and after the screening Naieer had an exhibit of his paintings and sold out in about 20 minutes, walking away with about $2000 and a huge smile!

I can appreciate that people with both intellectual and physical disabilities may face a tangled web of low expectations and stigma. But through my documentary work I’ve found that the most progressive, inclusive educational (high school and college) and employment settings don’t think about the labels. They think, "What type of supports does this person need to be successful? And how can we universally design the environment so people of all abilities can be successful?” From the beginning of production on this film, even before I found the subjects to film, I was committed to showing the most cutting edge examples of inclusion in high school, college and employment. That focus led me to the three central characters and the remarkable communities around them. They all deserve the spotlight, because the approaches we see at these schools and businesses need to be replicated more widely.  I believe deeply that people of any ability should have opportunities for inclusive education and competitive, integrated employment.

What have people with disabilities taught you about PWD advocating for themselves?

I’m not a person with a disability, so I don’t claim to speak for people with disabilities. But I can amplify the perspectives of advocates through my films and events.  Whenever Samuel presents with me, he totally steals the show. Same for the dozens of events when Naomie, Micah and Naieer (and sometimes their family members) were able to join me the post-film discussions at events. But the film has been shown at more than 400 events in 47 states thus far, so they can’t be everywhere. I tried to commit to the standard of “nothing about us without us” as much as possible for the rollout of this film, so we’ve recruited dozens of youth with disabilities to take part in post-film discussions (and many community and university screening hosts have done the same without my involvement). To see the power and confidence that comes from a young adult with a disability sharing their life experiences with a room packed with strangers has, for me, been the most moving part of our year-long screening tour.

Can you share reactions from Micah, Naieer and Naomie to seeing themselves in the film?

I’ve seen joy and pride and excitement from each of them at our event—and amazingly, very few nerves when they get up on that stage. I made sure to show each of them (and their families) the film before it went public. I don’t give my film subjects veto power over the content, but I make sure they have a chance to tell me if there is anything in the film that is inaccurate or represents them in a false light.  I think those early preview screenings were empowering for each of them. They’ve told me that the film, and the reaction they receive at events, makes them feel proud that their lives and accomplishments are worth highlighting and celebrating.

Can't catch the broadcast? Intelligent Lives will stream for free for one month online at World Channel, here, starting October 23.

Go to intelligentlives.org to learn how to host a screening of the film and access four free postsecondary transition films and an extensive resource library.  You can continue to hear about the film’s reach and impact, plus updates on the Naomie, Micah and Naieer, on social media:

Also check out this guest post by Dan Habib:

10 things everyone should know about hidden disabilities
Ellen Seidman at 8:18 PM