Hey, doc, maybe you know a good place to get Max foot rubs? 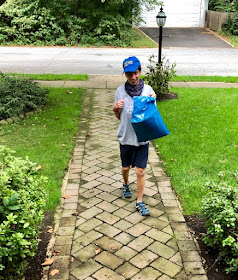 A good place to get Max foot rubs wasn't on my list of stuff to discuss at Max's annual neurologist visit yesterday. But that's where the conversation veered, and it was all good.

We've been seeing this neuro since Max was two weeks old. Although he is one of the more upbeat, wise and kind doctors of the world, the appointments used to fill me with anxiety. I dreaded the part where he'd measure Max's head; Max had microcephaly (a smaller than normal head circumference) as a result of the brain damage, and while I'd eventually take to heart the doctor's words to look at Max, not his statistics, I wasn't there yet. I was scared of that measurement, and the fact that it wasn't anywhere near where it "should" have been. I wasn't ready to accept Max for who he was. I only wanted to know what lay ahead for him. And of course, nobody could tell me that.

I went to the appointment with a list of questions, as I always have. I started off by mentioning that we'd seen a surge of maturity in Max this year. The camp program he was at had noticed it, too, especially in terms of his ability to follow directions. I talked about Max taking walks in our neighborhood (he has his Apple Watch on and we follow him via the FindMyFriends app), and how he's increasingly game to lend a hand, whether it's putting the recyclables on the curb or picking up the newspaper on our walkway on the weekend.

Max nodded enthusiastically, then returned to texting Dave on his Apple watch, as he proceeded to do for much of the appointment.

I launched right into a biggie: I asked for Dr. A.'s  thoughts about job possibilities for Max, who's going to be 17 in December. (OMGEEEEEE.) He noted this was a good time to start thinking about it, and noted that the his work potential would center around Max's strengths. We talked about how social and charming he is, and his fierce determination. (Max nodded.) He advised me to ask Max's school and our district liaison about Naviance, a software provider that helps high-schoolers identify their strengths for college and career planning.

I asked about CBD oil, and whether he felt it might benefit Max. He didn't think so—Max hasn't had the type of seizures that it could help prevent (he's had a few grand mals) or anxiety. But I'm going to be keeping my eye on that stuff.

We discussed Max's communication skills, and Max spelled out a couple of sentences using his watch. The doctor was impressed. Max also showed him a photo of a building at University of Southern California, as Max has decided he wants to go there. That lead to a discussion about which patients of his had been through college programs and which local ones existed for people with intellectual disability. There don't seem to be a whole lot of choices. Max will stay in his current school until he's 21, and then, we will see. If he still wants to keep studying at that point, perhaps other options will crop up and if not, perhaps we can make something happen.

I brought up the surgery to control Max's excessive saliva, which was a fail. I mentioned that the drool was a hindrance to Max socially and that the same could be true with a job. This is something that sometimes make me despair, because Max is the most charismatic boy but the drool can be off-putting to people. Dr. A. said he'd ask a doctor he knew about other treatments.

We got to talking about Max's passions, which made me perk up again. Max finally lifted his head from his watch. Last year at this time, Max had been itching to move to Orlando. And now, following a joy trip last February with Dave to California, he wanted to move to Los Angeles (hence, USC). "It's my new home!" said Max.  ]

"There's an excellent place to get a foot rub near us," he said, and while he couldn't remember the name he said he'd send it. Max looked excited.

Last, he took a look at his gait. "Wow!" he said. And indeed, Max's feet were both straight and not turning inward, as they have in the past; the procedure done two years ago to straighten his right foot had worked.

We left with a prescription to test Max's bloodwork and make sure his anti-seizure meds are at the levels where they need to be, a small list of to-dos and Dr. A.'s promise to check in with the doctor he knew and, perhaps even more importantly, let me know about the foot rub place.