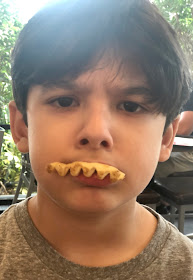 I recently got to do a Q&A with 7-year-old Logan Martinez, coauthor of the new book Kitties Don't Eat Quesadillas: An A To Z Picture Book For Picky Eaters. Logan drew all of the illustrations and collaborated on the words with his mom, Patty, a longtime work friend of mine. It's a seriously cute, engaging book that can spark good discussions about food—my little guy wants me to read it to him every night. Patty describes Logan, who's on the autism spectrum, as a really outgoing, intelligent, curious kid who knows everything about Sonic the Hedgehog, including the year his balloon crashed in the Macy's Thanksgiving Day Parade. "He loves music, reading, math, drawing and science experiments, and has a fascination with the alphabet, so it's no surprise he wrote a book that way," says Patty. "His favorite thing to do is make people laugh. But he's also equally empathetic. Kids are drawn to him; my spiritual friends have described him as a Rainbow Child."

Here's Logan, sharing more about the book plus tips for parents on helping their children. 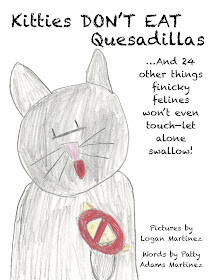 What are your favorite foods, Logan?
Quesadillas, which is how we came up with the book. My cat, Izzy, was a picky eater like me, and she got sick and stopped eating even her favorite cat food. So I said to Mom, ''Maybe we should try giving her a quesadilla." Mom said, "Kitties don't eat quesadillas." When I heard that, I thought it would make a good book title. I like the Dragons Love Tacos books and it reminded me of that. I also really like apples and pretzel spoons, which is what I call pretzel sticks when I dip them into peanut butter, and pancakes with Nutella. Dad introduced that to me.

What foods are you not so into?
Everything else! That's a long, long list, like a billion-trillion foods long. I don't think you have time for that.

Here's the answer my mom wants me to say, so it doesn't sound like all I eat is junk food: I don't eat green foods (except for Veggie Stix, which come in yellow, orange, and green). But for the past three years or so I've been drinking green juices that have healthy things like kale, spinach, apples, and celery in them. The reason I started drinking it, is because I liked orange-mango juice and my mom started calling it, orange green juice. I got used to hearing that, and decided if the green juice was the same, but just a different color, I could try it. I did and I liked it. 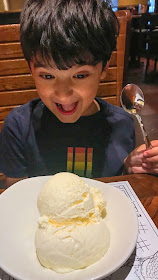 Can you tell us about how you created the book?
Once we came up with the idea, I thought we could do it as an ABC book, because I love the alphabet. So Mom and I talked about the foods we could use in the book. She came up with a lot of them, especially the ones I had never even heard of. I had no idea what vindaloo was. Now I've seen it when my parents have ordered in Indian food. But I still don't really know what it is. After we came up with food for all of the letters, we talked about why someone may not want to eat that food, and mom showed me lots of pictures from Google. I used a lot of the same words for why I wouldn't eat them, and Mom knows lots of words, so she came up with different words. Her words sounded good together, and sometimes they even rhymed or almost sounded like a song. I think she did a good job. Then after all that was done, I started drawing the letters and the cats, and came up with different expressions for their faces. My favorite is the cat that is puking. When I say that, mom tells me "You're such a boy"—whatever that's supposed to mean. Yes, I am a boy.

What do you hope this book will do for kids who are picky eaters?
Help them learn to be non-picky eaters. I am still learning, too. We can learn together.

When parents have kids who are picky eaters, what are some things they can do to help their kids?
Don't try to make them eat things, or yell at them. Mom wants me to tell you that she and Dad don't yell at me, but some parents do, I've heard them at restaurants! It can hurt kids' feelings. We aren't picky because we want to be difficult. We are picky because something in our brains says "ewww". It can be the smell, the look, the feel of a food. And sometimes seeing the food over and over does help you get used to it. I learned the Touch, Kiss, Taste way. In OT, I was taught even if I think a food looks gross, to work up to being able to touch it. This could take many, many times of seeing it before you will pick it up. Then work your way up to being able to "kiss it," which really means put it to your lips without biting into it. Much, much, much later on, when you really feel comfortable with it, you can bite into it. If you are not ready, you can lick it first as a cheat step, and eventually bite into it. This is how I discovered pretzel spoons. For the most part, I don't like when foods touch. So I would eat peanut butter with a spoon, and then eat pretzels—not together. But I worked on it in OT, and eventually decided I like the two together. 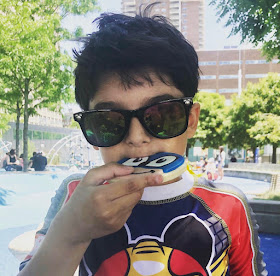 How have your mom and dad helped you be less picky about food?
They try to find things that are similar to things I already like, and show me that the new food isn't that different, Like if you like apples, you might like pears. Sometimes it works. Sometimes it doesn't! They also do things for me, like peel the skin off of my apples, cut the crusts off bread and wipe my apples with a napkin, so they aren't so wet. It's funny—I don't like wet foods, but I love to drink! So I may not eat my vegetables, or even many fruits, but my parents give me protein shakes, juices, and smoothies, so I still get in all of the healthy stuff. My protein shake has 8 grams of protein and 21 vitamins and minerals. I am not being paid to say that!

What is the next new food you might be willing to try?
I have come around to banana bread, so maybe eventually, like months from now, I will try bananas again. My mom says I used to eat them as a baby, but right now they seem too squishy. I don't want to be picky, but I can't help it. And I am working towards being less picky. But it's really, really hard. And I think it's really hard for other kids, too. The thing my mom and my teachers have told me—and that's why we wanted to say it in the book—is that just because you don't like something today, doesn't mean you will never like it.

For more information on the book (a portion of the profits are going to animal shelters and adoption centers), to see Logan reading a copy and to read reviews by cats, visit the website. 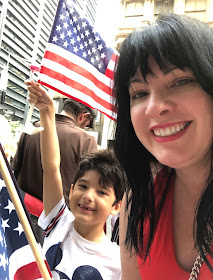