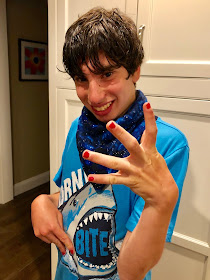 Hmmm... They put nail polish on him at the program he was at. He's pretty excited about it. Of course it's red, perfect for an aspiring firefighter

How do I feel about this?

It's so old-school to think that boys shouldn't wear nail polish.

Still, it doesn't seem like wearing red polish will do him any favors. He already gets stares.

But HE likes it.

A couple of weeks go by. The red nail polish sticks around. Max's toenails have been gnarly ever since he got home from camp so Dave takes him out for a pedicure/foot rub (Max really enjoys a good foot rub). Dave calls me from the salon.

Me: "What if he gets red on just his big toes? See what he thinks."

When Max comes home, he proudly shows off his two big red toes. In the days that follow, I continue to ponder the pedi situation.

So what if people stare at his feet?

Would ten red toes be any worse than two?

What kind of random solution was that?

OHMIGOD HE IS ALMOST SEVENTEEN.

He has firm opinions and a desire to express himself, same as any teen. And I need to respect that and
repress my I-know-what's-best-for-him instincts and quit worrying so much about him fitting in. Max isn't self-conscious about his disabilities or his toes.

I've been paving roads for Max his entire life, but it's time to let him lead the way.

Really, ten red toes are not going to make or break how people perceive him. Some will see and appreciate all of Max—his personality, his disabilities, his giant smile, his smarts, his toes, the whole shebang. Some will see a person who doesn't seem "normal," with or without the red nails. That's their problem, not Max's. And they don't deserve the pleasure of hanging with him.

Hello, it's not like he asked to get a tattoo of a firefighter. Nail polish comes off.  Besides, chilly weather is coming. Nobody will even see his toes, except him. And they'll make him  happy.

I owe this boy a pedicure do-over. 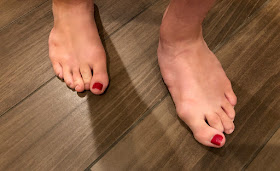