The awesome photo that celebrates babies of all kinds 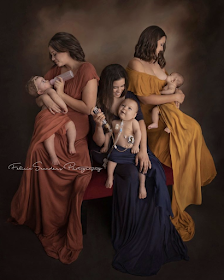 I absolutely love this portrait of three moms, posted by Henderson, Nevada maternity/newborn photographer Felicia Saunders in honor of National Breastfeeding Month—because it's beautiful and because it's  beautifully inclusive. There's one mom nursing, one mom bottle feeding and one mom feeding her baby via a G-Tube (aka a gastrostomy tube, a surgically-placed device that provides access to a child's stomach for feeding, hydration, or medication). As Saunders wrote, "I just want to say that no matter your choice of feeding you are absolutely amazing!"

As I stared wondrously at these moms and their babies, I thought of the guilt I'd had about feeding Max when he was a tot. Dave and I knew Max was at risk for a lot of challenges from the stroke he'd had at birth, but nobody at the hospital had mentioned eating. We'd been told it was amazing that he could swallow and it was: His brain stem had been spared damage. As it turned out, though, his sucking mechanism wasn't working so well and there was also a lack of coordination with swallowing. A nursing session could take an hour. When I pumped and fed him by bottle, I'd have to pad his little chest with cloth bibs because a lot of the milk would dribble right out. When Max went on solids, he'd also dribble out the vast majority.

I was shocked that something as seemingly simple as eating could be a challenge. This was in the early days, before I found out that other things that came instinctively to babies—from picking up a Goldfish cracker to holding a ball—would have to be taught to Max. He was perfectly cheerful about how long it could take to eat and he got adorably chubalicious but I felt pained by the fact that I couldn't feed my baby like babies were "supposed" to be fed. It got to the point where Dave would do a lot of the feeding because, unlike me, he had no anxiety or guilt about it.

Oh, man: Those "shoulds" will get you every time. As in, the way your child "should" eat/drink/behave/move/think/play/everything. Feeding a child is such a primitive instinct of motherhood, and watching Max struggle made me feel like less of a mom.

Years of feeding therapy would follow to help Max process food and liquids, and he progressed. He learned to chew pieces of food on his back molars. He figured out how to grasp utensils and feed himself. He found a way to hold a cup and control the liquid so it didn't go down his throat all at once. It was amazing. He still can't eat crunchy foods like potato chips or hard or chewy ones unless they are bite-sized, but he does just fine. He's going through a steak phase (the mac 'n cheese phase: SO MUCH CHEAPER) and we cut meat into bits and he forks it up with a giant smile on his face.

If only I could go back to that worried mom I was all those years ago and reassure her that babies eat and drink in different ways, and that it is OK. We moms need to feel the kind of positivity and acceptance that shines through the photo of those three mothers and their babies. As a mom said on the photographer's Instagram,"I'd planned to be the mom on the right, then I hoped I'd be the one on the left. In the end I was the mom in the middle, and spent so long feeling like I'd failed. Thank you for sharing this to hopefully help other moms who might be struggling." 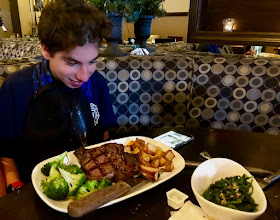