When your child with autism gets a best friend 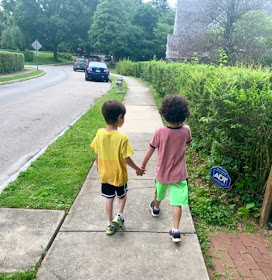 This guest post is by Jane Kim, an immigration attorney, writer and mom of a seven-year-old with autism. The family lives in the Philadelphia suburbs.

What a difference a year can make! This past year has been the most exciting for all kinds of reasons: My son, who has autism, learned to skateboard and ride a bike, he lost a tooth, he started loving school, and he got a bestie. It all took me by surprise, but I could not have imagined the last development.

About this time last year, I wrote about my son's first playdate and my hopes that he’d have and maintain friendships, despite not having playmates in his early years. He started kindergarten last fall, which is a half-day in our school district. There is an Autistic Support Program (ASP) offered in the morning, where 10 kids (all boys) from across the school distric convene at one elementary school to learn the kindergarten curriculum, focus on social skills and participate in individualized therapies including speech, OT and PT. In the afternoon, the kids split up into two general education kindergarten classes where they incorporate what they learned in the ASP. My son has thrived in this setting, and watching him come out of his shell has been nothing short of magical.

My son and B were in the same ASP class. B’s mother, a Homeroom parent, did a great job of inviting the boys and their moms to her house, while connecting other parents with each other. I’m thankful to her, as a mom that often doesn’t have the time to get to know other parents, for her inclusive approach at the beginning of the school year. I wish there had been more moms like her at my son’s preschool.

In the beginning, a decent amount of thought and planning went into each playdate. My son’s wonderful behavior technician, Christina, and I would brainstorm different activities we thought both boys could enjoy, while also trying to incorporate some of the skills and/or behaviors my son was working on (such as increased independence with staying on task, turn-taking and asking questions) as part of his ABA programming. Some of our ideas included “story time,” riding scooters around the neighborhood, board games, try-and-find worksheets and freeze dance. 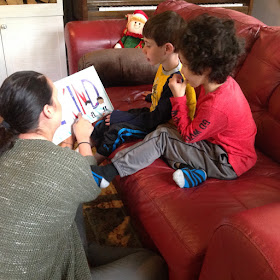 Some ideas worked, others fell flat. I discovered their abilities were quite varied. One could read, the other was starting to learn. One was quite conversational, the other was less so. One was potty-trained, the other was working towards it. One had fine motor challenges, the other didn’t. But what one couldn’t do, the other was supportive and remarkably patient. Their strengths and challenges were apparent, and they didn’t make it a big deal.

As the playdates became more frequent, there was less and less adult planning. Instead, they chose to share with one another what they enjoy doing on their home turf. One of B’s favorite pastimes is walking to Wawa for blue slushies. My son enjoys riding his scooter to the train station, and guessing which trains come next – Amtrak or Septa. Other kids—perhaps neurotypical kids—may not be so willing to participate in these eclectic interests, but these two don’t bat an eye.

“Eat your broccoli!” B says at dinner. “Make sure you wash your hands!” my son declares after B uses the bathroom. There’s lots of silliness and being LOUD.  Recently, they’ve started talking on the phone.

For much of his life, my son was a passive participant—he didn’t tell us what he wanted to eat, wanted to do, what he enjoyed. He was an incredibly compliant child, and I longed for him to say something conversational, to assert his opinion, to challenge his Dad or me. So to listen to him tell me he wants to see B, while offering ideas for playdates, has been remarkable.

Their playdates have expanded to include other kids from the ASP class—there have been group skateboarding lessons, birthday parties, meeting at area parks. I’m hoping they can maintain these friendships during the upcoming school year, when they enter first grade, as they continue their schooling in their home elementary schools. This is an amazing group of kids that have bonded and supported one another and to put it simply, have felt as if they belonged. I give kudos to our school district for piloting an ASP classroom where kids can familiarize themselves with the school routine and learn amongst other kids similar to them…but why should the road end here? I’ve been told that the home schools are more than equipped to address each kids’ individualized needs, but what about the intangible benefits of feeling like part of a group?

We all want our kids to learn, but school is not just about academics. It's about navigating social relationships, teamwork and feeling like a part of something bigger than yourself. Many kids on the autism spectrum struggle with this, and it's a large part of what is missing from their lives, and their families lives. As my son has formed friendships and slowly come out of his shell, some of my own wounds have started to heal as well.

As parents, we all want our kids to thrive and to live up to their full potential. If they seek out and desire friendships, these friendships undoubtedly enrich their lives. In my life, thriving has meant having the right opportunities and the necessary support systems in place. I’ve been fortunate to have wonderful people throughout my life, starting with my parents that raised me, and then later as an adult in my home and work life and in my community. When going through transitions or making difficult decisions affecting my son’s programming and education, these people have listened, challenged and comforted me. They helped me thrive, and I want nothing more for my son to experience similar support systems, if this is what he needs to be fulfilled.

At the end of most playdates, as we’re saying our goodbyes, my son and B hug and tell each other they love one another. I get the same flurry of questions: When can they see each other again? Why can’t one of them stay? Can’t they play for just one more minute? Sometimes, I’m separating the two of them, and there are tears. There’s no judgment, just love and affection and wanting to stay in that moment.

This post is dedicated to my besties, my sister (at left, with me) and MT. 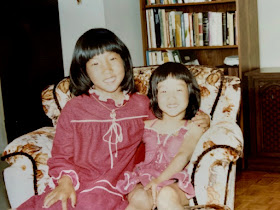 Find Jane on Twitter @JKimRites
Ellen Seidman at 7:00 AM