The news from camp 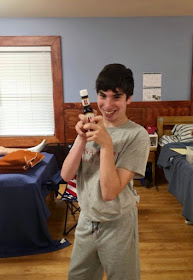 So, Max and his A1 steak sauce are happily settled in camp (if you missed  it, this is what's up with that). As far as I can tell, he hasn't been demanding steak for dinner. A postcard arrived yesterday, in which Max noted:

In between telling everyone at camp of his destination dreams, he seems to be having a blast because he is grinning his head off in nearly every single photo.

I mean, have you ever seen a happier dance? 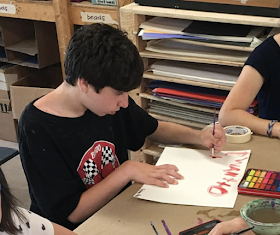 Can you guess what followed the words "I want to...."?

I've noticed a few other amazing things from the photos, stuff only I would spot. Max looks to be focused in sit-down activities, which hasn't always been the case. Oh, and this one time he was standing on stage he was arm in arm with his fellow campers—as in, his arms were holding their backs, and he looked totally natural standing there. For Max, situating his arms with his palms facing upward (aka supination) does not at all come naturally to him. But for him to do that and place his arms at all behind his body is a pretty amazing feat of gross motor skills for him.

Oh, and also? This is his third year at this camp, and his very first without his plastic red fire chief hat.

ICYMI: Why you should send your child with disabilities to camp