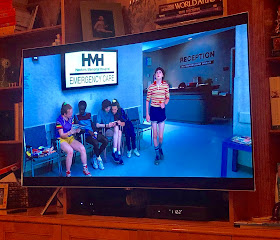 Max's legs worry me. He's gotten a little taller in the past year, and his legs seem pretty stick-like. Once shorts season started, this became more apparent than ever. I wondered if his cerebral palsy was the cause. Then Dave and I were watching Stranger Things the other night and I got some unexpected reassurance.

If Max has taught me anything, it's that abilities come in all shapes and sizes. His legs may be thin yet boy, do they work: His walk is pretty damn amazing. While he's tripped once in a while at school on his classroom chair, when he's at home, ambling around the neighborhood or otherwise out and about he is steady on his feet. The surgery he had two summers ago to loosen the muscles and tendons on his left foot really helped. I see his right foot turning in a bit now and there's a good chance it will also require surgery but for now, it's OK.

I've read that for people with cerebral palsy on one side of their body, the arm and leg on the affected side can be thinner and shorter. However, Max has four-quad spastic CP, which means it affects all his limbs, so I'm not sure the CP is to blame for this—his arms don't seem overly skinny. His natural body shape plays into this, as his legs have always been on the slimmer side. Now that he's on the go a lot more, he's burning extra calories. He already does this to excess since his muscles, which are on the tight side, work extra hard with movements. We do our best to keep Max well fed, especially with steak and ice-cream. He downs Boost, a nutritional supplement. But those skinny legs, well, they are hard for this worrywart mom to handle.


You never know where you will find inspiration, and this time it came from Stranger Things. I have some mixed feelings about this season—the Russian twist isn't very plausible. You know, unlike The Demogorgon, who in Episode 5 infiltrates a hospital. The gang was, naturally, in the waiting room. As Will got up from his chair, sensing the monster's presence, all I could do was stare at his legs. His stick-like legs peeking out of those '80s track shorts. Will has Max's legs! Max has Will's legs! It's not just a cerebral palsy thing! After that, I started noticing boys with skinny legs when I was walking around town (er, I hope nobody thinks I'm a perv).

I'll still be querying the pediatrician and the orthopedist at upcoming annual appointments about Max's legs. As if I'm going to stop worrying. But for now—to paraphrase that old ZZ Top song—Max has got legs, and he knows how to use them.

UPDATE: An online friend shared this research review with me that determined smaller muscles and muscle atrophy are a thing in people with CP. 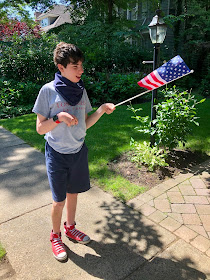