The fear parents have about police and their disabled children 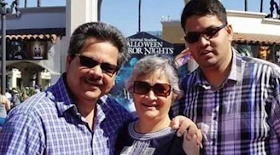 Max is a good-natured, cheerful kid who occasionally roars when he gets upset. Literally, he roars. While he doesn't do this at school, he does not hold back when he's with us. It doesn't matter whether we are seated in a restaurant or walking down the street—he'll roar. This can disturb the peace for all of us. Lately, though, I've been thinking about how dangerous this could be...to Max. I got on the phone with his school psychologist this week to discuss it.

On June 14, a nonverbal man named Kenneth French who was shopping at a Costco in Southern California with his parents was shot and killed by an off-duty officer. His parents were also shot and critically injured. That's the family in the photo above. Their lawyer has said that Kenneth pushed the officer, without going into detail, and that his actions did not justify gunfire. It was possible that a change in Kenneth's medications had affected his behavior. A cousin of Kenneth's told The Press-Enterprise that he was "non-violent, non-aggressive and nonverbal" and "a gentle giant."

This murder was deeply disturbing, and personal. Although Max communicates with words, his speech can be hard to understand. He, too, is not violent or aggressive. But when he roars he sounds scary, even to me.

I sat up late at night, googling. I read an op-ed in the L.A. Times by Marie Myung-Ok Lee, the mother of a young man with intellectual disability, that listed a number of cases in which people with physical or intellectual disability have been shot by police. "My son does not understand the law. But more urgently, the law does not understand people like him," she wrote.

I thought back, once again, to Ethan Saylor, a man with Down syndrome from Maryland who died after an encounter with police. Six years later, Maryland is a leader among states that mandate police training for responding to people with intellectual and developmental disabilities, thanks in part to advocacy by Ethan's mom, Patti Saylor. At least 27 states have crisis intervention training that require officers to have training for responding to people with mental health issues or substance abuse issues. And yet, officers may not know how to handle a nonverbal man who may be acting violently...or seemingly violently.

As is often the case, it all boils down to awareness and understanding. Earlier this year, I shared a story about a man with autism acting violently in a hospital who was soothed by safety officers there. Perhaps Kenneth's death will spur more police departments to offer training to officers on how to appropriately engage with people with intellectual disability. But why should it take the death of another person with disability to bring about change?

I spoke with the psychologist at Max's school yesterday. We agreed that Max's reaction is part frustration and part teen, and we'll be working on coping mechanisms. Suddenly, this seems more urgent than ever. I won't always be there to protect Max, I know that. What I don't know is whether Max could protect himself from an officer who just doesn't understand him.