Mosquito season is here. Tick season is here. Your-kids-don't-want-to-come-inside season is here, too. How to not let the bugs bite? Long sleeves, long pants and bug spray, of course—plus spraying clothes with a protective substance (more on that below).

If you're like me, you'd prefer to avoid bug repellent that contains DEET even though scientists consider it safe and effective when used as directed. Still: chemicals. After doing my research, I've settled on Repel Lemon Eucalyptus, a DEET-free alternative that works.

Oil of lemon eucalyptus is a refined version of a compound that comes from the gum eucalyptus tree. Consumer Reports' testing of insect repellents found that Repel Lemon Eucalyptus, which contains 30 percent of oil of lemon eucalyptus, warded off mosquitos and ticks for at least seven hours and worked as well as DEET. It smells verrrrrry strongly of lemons, but not chemical-y. Note: It is not recommended for use in children younger than three as it can cause temporary eye injury, likely because it contains ethanol. (No insect repellent is recommended for use on infants under two months old.)

FYI, lemon eucalyptus is not an essential oil. Actually, none of the essential oils Consumer Reports tested— including cedar, cinnamon, citronella, clove, geranium, lemongrass, rosemary, and peppermint—provided good protection. Some people like picaridin as a non-DEET ingredient, but products with it didn't score as high in Consumer Reports' testing. 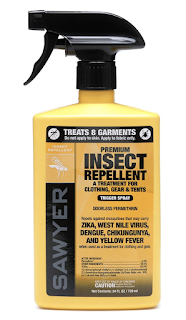 Another proven tactic for warding off mosquitos and ticks, recommended by The U.S. Centers for Disease Control: spraying permethrin on jackets, shirts and pants, which kills mosquitos and ticks on contact. The insecticide, which goes only on clothes, is odorless and lasts for up to six washes. I use this stuff: Sawyer Premium Permithrin Insect Repellent. It's not a substitution for bug repellent—use both. Follow the label instructions for applying, don't put on skin or apply to clothing while it's worn, spray enough so that the material is damp, let fully dry (that'll take a few hours) and wash permethrin-treated clothing separate from other clothes. You can also buy permethrin-treated clothing.

Wishing you a happy, no worries summer!
Ellen Seidman at 10:06 AM