When time passes so slowly, and then it speeds by 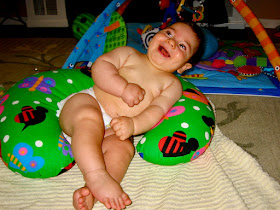 I was on a call yesterday with the director of the camp program Max attends every summer. I couldn't believe we were, once again, discussing Max and his needs. Had a year really passed? Yep, but it sure didn't feel that way. This is the very opposite of how time felt when Max was a tot. Life seemed to go by in slow-mo. Every day that passed was another day when Max wasn't making progress, and another day filled with anxiety.

When your child with disabilities is young, it is hard to believe there ever will come a day when you won't be constantly worried sick about his future. But the years go by and you grow to accept your child for who he is. You never stop hoping for the progress, of course, yet you do stop watching your child's every little move. You accept that your child will do what he can do, on his own time—and that he's a pretty awesome child any which way.

So there I was on the phone with Orlee.

Was Max still into the fireman thing?

Yes, but he's no longer wearing his red Fireman Max firefighter hat. He even lets Ben put it on at times. Gasp! Although who knows, last year he wasn't wearing it much but when he went to camp, on it went.

Does Max still want to move to Orlando?

Oh, that was so 2018. As of now, Max is intent on moving to Los Angeles. Dave was there on business the other week and Max kept texting him every fifteen minutes to bring home a t-shirt. When Ben is acting up and Max tries to discipline him, he tells him, "You're not moving to California with me, Benjamin!"

Speaking of texts: I told Orlee that Max now has an Apple watch, and it didn't seem like a good thing to bring to camp or he'll be texting us all the time. This has actually been one of the more remarkable bits of progress this past year. At first, Max was typing texts. Then he'd try to give the watch speech commands, but it couldn't discern what he was saying. So now, Max draws letters to make up words.

Yes, but he is on a steak kick. Not that we are expecting the camp to serve him steak—that would be a first! He will just have to suffer without his sirloin for several weeks. 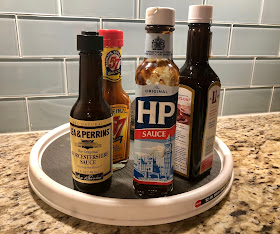 Max insists we keep all the steak sauce on display. We might need to send a bottle with him.

The main goal I had in mind for Max for summer camp, besides having a ton of fun, is to continue to grow his independence. He is a boy who needs a helping hand, but at home it is sometimes an uphill battle because he is so used to having us do stuff for him. He'll have new counselors this summer, and so they can challenge him to wash himself in the shower or put a marshmallow on a stick by himself.