The perks of skateboarding for kids with autism 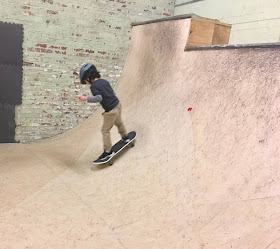 This guest post is by Jane Kim, an immigration attorney, writer and mom of a six-year-old with autism. The family lives in the Philadelphia suburbs.

My son falls down, looks over at me, then gets back up for another go. This simple act—of trying again, without prompting— is exhilarating to watch. As the parent of a child on the autism spectrum, I spent much of my son’s early years instructing, cajoling and beseeching him to play with various toys and participate in activities when there was little or no interest. Our house was a bona fide kids’ entertainment zone filled with every imaginable plaything, purchased in the hopes that something would spark prolonged enjoyment. I often wondered why he had little interest in toys and games and when he did, why he didn't instinctively know how to play with them.

The stress and worry of those days seem distant when I watch my son’s skateboarding lessons. He never told me he wanted to learn to skateboard, but I had a hunch he’d enjoy it. When he was three years old, my sister got him a scooter as a gift, and he wouldn't let it out of his sight. He quickly learned to ride it and was soon faster and more adept than other kids his age. After riding it regularly for about two years, he began placing his feet on the deck as if it were a skateboard, and started using one hand to steer. He seemed ready for the next step.

We got lucky with Brett, his wonderful skateboarding instructor, with whom he has hour-long weekly lessons. Although Brett has never had experience working with kids on the autism spectrum, he’s a natural. He keeps the lesson light and fun, and is able to adjust the pace of the lesson accordingly. Sometimes, when the skatepark is crowded and the sounds are amplified, my son’s attention wanders. Brett is able to re-direct his attention by doing tricks or giving him a few minutes to watch other kids skate. 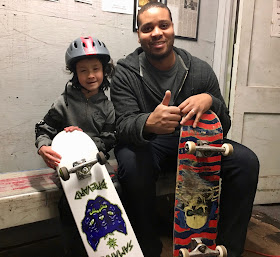 Some lessons, there’s a lot of progress (did he really just fly down that ramp?!); others are more focused on repeating actions so he can get the hang of the basics, like bending his knees when he hits the curve in the halfpipe to maintain momentum and balance. With just a few lessons under his belt, he's able to push and get on a skateboard, ride down a ramp unassisted and is working on riding independently in the halfpipe. A halfpipe is a ramp curving up at both ends (in a U shape) and is used for doing tricks on a skateboard.

Physicians and therapists will tell you what is developmentally appropriate for your child with disabilities; test scores will tell you how many standard deviations below the mean your child is. Given this information, at times it’s hard to think about anything other than your child catching up and his challenges. Still, it’s up to us to nurture our children’s strengths, and seek out that information from their teachers and therapy team. Just a couple of key strengths have the power to overcome numerous challenges, as we may well know from our own experiences.

Aside from the physical benefits and the obvious fun factor, I’ve asked Brett if there were any other benefits skateboarding offered to kids. He said, “Skateboarding allows children to explore their creativity. Many skateboarders grow interested in filmmaking, photography, graphic design, music and entrepreneurship, to name a few areas. The sport creates leaders of any realm by encouraging them to think outside the box. Kids who learn skateboarding are also more confident in themselves. They understand that failure – such as falling when trying to learn a trick – is OK, because it’s a sign of progress. Most times, when a child feels most vulnerable is when they are about to experience the awesome feeling of success.”


Who knew that a board with four wheels could help lay the foundation for such life skills?  I sure hadn’t. I’m getting choked up witnessing the look of pride, the increased persistence, and most importantly, the excitement of learning something he enjoys at every lesson.


Brett also mentioned skateboarding gives kids the opportunity to meet new people from different communities and neighborhoods, people they may not have necessarily had the chance to meet. Although kids may initially feel intimidated to go to local skateparks, the love of skateboarding is the common thread that brings kids together.

I was fortunate to spend my formative years overseas, with people who were vastly different from me. Their differences became the norm, and I inadvertently learned to value and embrace them while seeking common ground. The most important lesson I learned is there is always common ground. As a person on the autism spectrum, my son could grow up viewing the world as two distinct groups of people: those on the autism spectrum and those that aren't. But I’ll be doing my best to make sure his view of life isn't this restricted.

My son’s world will grow bigger every time he values differences while recognizing similarities. My son’s perspective will expand every time he hangs out with kids of all abilities and backgrounds and they laugh together and get to know and learn from each other. He might not experience growing up overseas–but perhaps hanging out at a local skatepark won’t be too different, after all.

Jane Kim can be found on Twitter @JKimRites.
Ellen Seidman at 6:45 AM