What this photo says about a boy and his passions 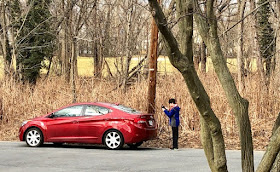 When Max has a passion for something, it is all consuming. Which he explains why he was standing on our block the other day photographing the license plate of some random car.

Max is in love with California. Since a visit a couple of months ago, he has decided he will someday move there. This is not to be confused with his passion for the state of Florida, which is sooooo three months ago. He has since moved on to a bigger and, in his opinion, better state. What both states have in common is that they are warm, and Max really loves warmth. It might be because, as an adult with cerebral palsy once pointed out, that his muscles feel more relaxed in the warmth. But it could just be that this boy likes warmth. And vacation vibes.

Max had been sitting on our porch when he opened the front door, poked his head in and shouted "California!" I realized a car parked nearby had a California license plate. Max was very excited. When we're driving around and he starts squealing, I know why it, as recently happened in a parking lot. Then Max said something else and I wasn't sure what he was saying until he came in and showed me on my phone. A picture. He wanted to take a picture of the car.

I was all, "No, you go take a photo of the car." Not because I was embarrassed—I mean, does any woman ever have any sense of mortification ever again after childbirth?!—but because I wanted him to do it. He said he couldn't.

"Yes, you can," I said, and I reminded him that he had to hold his iPad with one hand and press the white button with his right finger. Off he went. I watched him struggle to do it and I shouted directions from the porch. He ended up taking a whole bunch of photos of that beautiful license plate.

I don't know if Max gets so passionate—some might say obsessed—because of his intellectual disability or not. It doesn't matter, it's the way his mind works. Every one of our brains operates in its own unique way. The fascinations have come and gone over the years: the color purple, spaghetti, Lightning McQueen, car washes, the color red, fire trucks. We indulge him—because if it brings him joy, great. I appreciate that his passions have expanded over the years, as his sensory issues have ebbed, although they're not as cheap as they used to be. He loves to try new sushi places. He adores traveling. Oh, and he is quite fond of BMW convertibles.

A couple of hours later, Max's music therapist showed up and they hung out in the kitchen as I listened in from the living room. Max had suggested the song: California Luv by 2Pac. And then came Katy Perry's California Gurls.

"California girls, we're unforgettable, Daisy dukes, bikinis on top!" he sang, enthusiastically. And I smiled.
Ellen Seidman at 9:01 AM