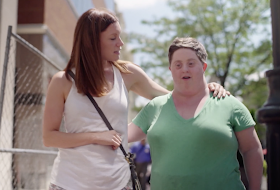 Imagine if someone referred to your child, your mother or father, or your sister or your brother as a loser. Or called them stupid or pathetic. You'd get upset, right?  That's exactly how Amanda Lukoff felt growing up. Her sister Gabrielle has Down syndrome. Amanda was horrified by the rampant use of the r-word, which demeans people with intellectual disability. And so Amanda, a filmmaker, decided to do something about it. The result is her powerful new documentary, The R-Word.

The R-Word - Trailer from Thorough Productions on Vimeo.

You don't have to love someone with intellectual disabilities to care, though. If you care about decency and humanity, period, this is your issue, too.

Special Olympics just launched a new campaign: Spread the Word: Inclusion. It's the natural followup to their "End The Word" campaign, created to raise awareness about how we talk about people with intellectual disability (ID) and give them the respect they deserve. Among other initiatives, there's a pledge to be inclusive—by welcoming someone who has been left out, sitting next to someone alone at lunch, or saying hello to someone in the hallway.

Inclusion, of course, starts with treating people with disability with equality. As Amanda's film illustrates, the r-word makes people with intellectual disability seem like lesser human beings. I've long spoken out about it. It pains me to hear a word that stigmatizes my son and others with ID used carelessly in conversation. Max has enough obstacles to overcome in this world.

Amanda's hour-long film explores the history of the word, its pervasiveness in movies and everyday life and its implications. The story is told through four sibling stories—including Jason Newbury and his sister Jenni Newbury Ross, who founded the Pals Program, and the Long brothers, who've entered triathlons together—and first-person accounts from self-advocates like Lauren Potter and John Franklin Stephens. "I liked that the film told people not to use the r-word because it upsets other people," says Gabrielle. "It was great being in the film because I'm famous and people I know can see me in it."

Viewers also see people who treat their brothers and sisters like any brothers and sisters, doing their best to include them and make the world more welcoming to them. "I just want to be treated like everyone else," says Gabrielle in the film. But a word that warps perceptions about people with disabilities is a tremendous obstacle to equality.

You don't have to love someone with intellectual disabilities to care. You should care because an entire segment of our population is being marginalized by a slur.

It is not OK to use racial slurs—basically everyone knows that. So why do some people consider it OK to use a word, no matter how jokingly, that's crude and offensive? What's the big deal about using a different word? As Tim Shriver, chairman of the Special Olympics, puts it in the film, "Changing the language is not enough to change a culture, it's not enough to change laws or change behavior, but it's an important dimension of changing all those things, and it's the one that everyone can do."

I was especially taken with the story of the Marcellinos, the family behind Rosa's Law (named after their daughter with Down syndrome, who was 9 years old at the time). It removed the terms "mental retardation" and "mentally retarded" from federal health, labor and education policy and replaced them with "intellectual disability." Rosa's brother Nick delivered testimony when the bill was introduced in the Maryland General Assembly; his speech was co-written by his family.

Some people say they are just words, and it is not going to make a difference if we change the words. Some say we shouldn't worry about the words, just the way we treat people. But when you think about it, what you call people is how you treat people. If we change the words, maybe it'll be a start of a new attitude toward people with intellectual disabilities. And they deserve it.

But you don't have to love someone with intellectual disabilities to care.

"I believe that everyone should care about the pervasive use of the r-word because of one word—respect," says Amanda Lukoff. "If I don't need to have a sibling who identifies as LGBTQ to know that people in that community deserve to be treated with respect, then others shouldn't have to have a sibling with intellectual disability to understand the r-word is problematic. People of all abilities deserve respect."

The R-Word film will be shown at the ReelAbilities Film Festival in New York City on Monday, April 8; self-advocates Loretta Claiborne, David Egan and John Frank Stephens will be in attendance. If you'd like to have a screening of The R-Word at your school, college campus, company, nonprofit organization or community group, fill out this form. 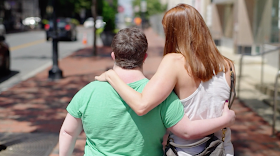