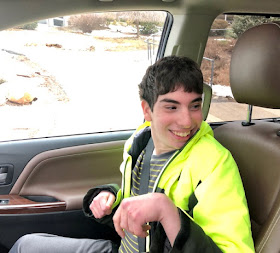 OK, how do you pronounce cerebral palsy?
Suh-reeb-ral palsy, here in the U.S. "Cerebral" means relating to the brain; "palsy" refers to weakness or challenges using muscles.

Cerebral palsy isn't that common, is it? Aren't there more autistic kids?
An estimated one in 323 children has cerebral palsy, according to the Centers for Disease Control and Prevention (CDC), while about one in 59 has autism, per the CDC. Cerebral palsy is the most common motor disorder among children in the United States. It happens more frequently in boys than girls.

Does cerebral palsy affect people physically and cognitively?
It can have an impact on both, depending on where in the brain the damage occurred in utero or at birth (Max had a bilateral stroke at birth).  Since the brain sends the muscles signals for movement, muscle control, muscle coordination, muscle tone, reflex, posture and balance can be affected by CP, along with speech, cognition and vision. There can be feeding issues, given that your tongue is a muscle, along with swallowing. Some people have physical disability but not intellectual disability; it's more rare for the opposite to occur.

Why do some people with cerebral palsy hold their hands in a different way?
When spasticity occurs in someone's arms the flexors tighten up, pulling in the elbows, hands and wrists. A person's hands can form tight fists. Whether that looks "funny" is all in your perspective. Max may hold his hands differently than most other people or walk and talk differently but that's Max. We all have our differences; some are just more visible than others. One of the many things my boy has taught me is that people's bodies function in a variety of ways—it's all part of the glorious spectrum of the human race. There may be "typical" ways to talk or walk or move but there are no "right" ways.

Does cerebral palsy hurt?
It can—muscle pain, hip issues, and reflux can be issues, to name a few. Max's muscles get pretty tight at times, and while he does not complain it could be because he's used to it. When I've written about Max's desire to move to Florida and/or California, adults with CP have pointed out that it could be because his muscles feel more relaxed in warmer weather.

Is cerebral palsy curable?
It is not. Various forms of therapy have helped Max work around his gross-motor, fine-motor, and speech challenges. He is still figuring out what it means to have CP. There are adults with CP who bristle at the idea of "curing" it, as they consider CP an integral part of who they are. I hope Max will, too.

Can cerebral palsy get worse?
CP does not get worse over time, but symptoms can change or improve, sometimes depending on circumstances. Coldness makes Max's muscles tighter. So does excitement or anxiety. Max's tendons got tighter in one foot over time, and in 2017 he had a procedure called Selective Percutaneous Myofascial Lengthening to correct it. Still, Max has never stopped making progress. He crawled on all fours at age two. He took his first step at age three. He said his first word ("no!") at around five. At 16 years old, his speech and intellect are still improving, and he continues to learn how to manipulate his hands to get things done.

Isn't it crappy to have CP?
It bothers me when people give Max The Pity Stare. He is a cheerful, fun-loving, sometimes stubborn teen (as teens can be) who is living his best life. At times, Max gets frustrated when he his body won't do his bidding, but he either asks for help or figures out another way. He doesn't see himself as unfortunate. Me, I struggled during the early years. As I've often said, society does not prepare you for having a child with disabilities—people have long considered it tragic. But now Max is just Max to me, a child as perfectly imperfect as any of my children.
Ellen Seidman at 10:19 AM