Teachers being this cruel to children with disabilities: just despicable 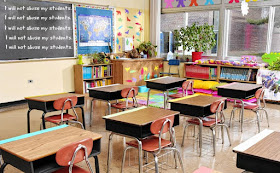 "I ought to backhand you right in your teeth. How is that for anxiety?"

"I'm going to pull your hair until you start crying."

If you think that's dialogue straight out of a TV prison sitcom, you are sadly wrong. That is the sound of two instructors in a special education classroom talking to children, as reported by WJLA news. They were exposed by the mother of a 6-year-old girl who has autism and is nonverbal. Mom Amber Pack sent her daughter in with a hidden recording device in her hair after the child didn't want to go back to school.

The school is Berkeley Heights Elementary School in Martinsburg, West Virginia. In October, Amber posted a brief clip on her Facebook page from the eight-hour recording. (At minute 1:36, you can hear a woman saying "I'll punch you in your face" and at minute 1:52 you hear "shut up.") While the investigation continues, the local Prosecutor's Office found no criminal wrongdoing—under West Virginia law, verbal abuse of children is not a criminal act, notes The Journal. (From what I've read, states handle situations like this in different ways.) The Office for Civil Rights of the U.S. Department of Education has opened its own investigation.

The instructors' behavior isn't just assault, it's bullying. In some instances, when bullying is based on disability, race or ethnicity, color, national origin, sex or religion, it overlaps with harassment and schools must legally address it. (Here's more information on StopBullying, plus a look at some stats on the problem)

Amber's daughter and another child in that class have since moved on to other schools. Three of the instructors involved are on paid administrative leave.

You're an educator? As in, you've signed up to work with children? Children with disabilities, who can be extra vulnerable? And you think it's OK to threaten them with bodily harm and call them names and be derisive and demeaning toward them?

Verbal abuse can be just as harmful as physical abuse. And children with disabilities are thought to be abused more frequently than children without disabilities, according to the nonprofit Prevent Child Abuse America. "Children with disabilities may be perceived as less valuable than other children," notes the group's fact sheet. "Discipline may be more punitive and accompanied by a lack of respect." Sadly, this is not an isolated incident—reports of teacher abuse crop up in the news on occasion, often involving students who have autism.

To be sure, the instructors in the West Virginia incident are just a few bad eggs. They should sll be fired, at the very least, and made to permanently stay far away from students. Even if they are never found guilty in a court of law, I hope they can do some reflecting in the court of their souls.
Ellen Seidman at 6:40 AM