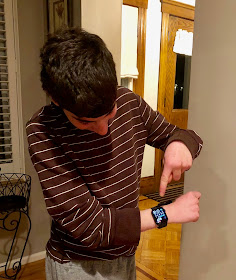 We've been meaning to get Max a tracking device, mostly so I know his whereabouts when he's on his school bus. We've also been wanting to get Max a phone—his teen sis has one, and we felt it was only fair. But manipulating it is hard for him. So we started looking at the Apple Watch and this weekend, got him one. Everyone's into it. 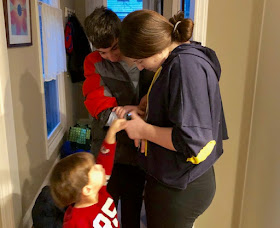 Thanks to the Find My Friends app, I will be able to tell where Max is at all times. But I suspect I actually won't be needing it much because Max has been calling approximately every 12 minutes.

"Hi, Mommy!" he'll say when he calls from the car.

"How are you?" he'll call and ask from the other room.

"I want to move to California!" he'll inform me when he's at a restaurant with Dave. Ever since their boys trip last week to Disneyland, he's ditched his dream of moving to Orlando and has switched to California goals. Dave decided to enable this fantasy by getting Max a California phone number. At first, I ignored his calls because Santa Monica kept popping up and I thought it was spam.

When Max is not calling, he is checking the weather in California, texting and asking me to call him or letting me know other important information. 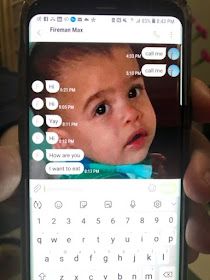 Some controversy has cropped up. When I ask Max what time it is and he'll tell me, say, 8:39, Ben will disagree. "No, it's 8:37!" Ben will proclaim. This despite the fact that Ben has no clue how to tell time, but he is very much into sibling rivalry.

Max is so excited by this gadget that I am now only allowed to call him when he and Dave are out together. I am excited by his dexterity—he's doing a great job navigating the screen. Isolating his pointer finger is something his occupational therapist worked on for years when he was a tot. Max is still figuring out how to press the button on the side of the watch, which takes you back to the home screen.

Once again, I'm feeling grateful for technology that opens up worlds for Max. Oh, and if anyone needs me, I'll be on the phone with Max.
Ellen Seidman at 6:40 AM