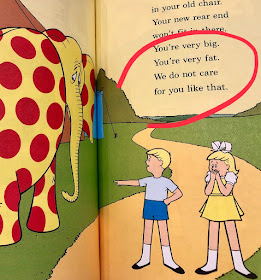 A children's book with a message about self-acceptance: What could be bad? You have to read it to believe it. Too bad Ben and I did last night.

Ben adores a book called Put Me In The Zoo. It's from the Beginner Book series cofounded by Ted Geisel, aka Dr. Seuss. The book is about a leopard named Spot who's determined to get into the zoo and shows two kids all the tricks he can do with his spots. Turns out he's better for the circus. And he didn't even have to use LinkedIn! Spot and friends return in a sequel called I Want to Be Somebody New! in which Spot decides he's had enough of the circus life and decides to experiment with new identities. It sounded cool, and I got it for Ben without a second thought.

At bedtime last night, we settled into the rocking chair in his room to read it. In his quest for a new him, Spot transforms himself into an elephant. This is not OK with either of the two children, who are dressed in outfits seemingly designed by Dick and Jane. "Being that big cannot be fun!" they note. They point out stuff Elephant Spot can't do—walk on a fence, squeeze between circus tents and, heck, get into the door of his house. And then these children, who have turned quite obnoxious since the original book, rant on:

You cannot sit
in your old chair.
Your new rear end
won't fit in there.
You're very big.
You've very fat.
We do not care
for you like that.

Oh, but Elephant Spot cheerfully accepts all this: "Every word of what you say is true." So he tries again, morphing into a giraffe. The kids aren't having any of it:

Being that tall can't be any fun.
You're taller now than everyone!
Your head is now so high in the air,
It's hard to see your face up there.

HUH?! Is this book actually a Dr. Seuss parody? I check the front pages. Nope, it's real and written in 1986, not 1956. And it's by the same guy who wrote the original book, although there is the possibility that Donald Trump ghostwrote it. I'm tempted to just close it, but instead make up words as I read to Ben. Spot's identity crisis continues and this time, he turns into a mouse. Now he's "much too small" and (nah-nah-nah-boo-boo) he can't even open up his front door! And people put traps inside their homes to catch mice, the children inform him. !!!

I am half-expecting Spot to turn into an amputee dog at which point Jane Judgmental and Dick Dick proclaim:

Being a dog with three legs
Makes you hobble when you pace
Why, you couldn't even enter
A four-legged race!

The book ends (trust me, not a spoiler alert) on a relatively more positive note as those darling children ask Spot to be the old friend they liked. "Show us what we want to see!" they beg. And Spot decides they are right and declares "It does feel best to be just me!" And they all lived happily ever after in their warped, wrongheaded world.

As the parent of a child with disabilities, I may be sensitive to negative messages about people who aren't seemingly perfect. Really, though, any parent should take exception to reads like these. Kids learn that it is not good to be overweight, tall or small. And that if someone doesn't appreciate your efforts at changing yourself, then you should keep trying to make them happy. And that spots are not your best fashion accessory. Who in their right minds at the book company—it's an imprint of Random House, a biggie—decided that this book is beneficial for impressionable young minds?

A bunch of reviewers over on Goodreads agree with me, but there were many more who thought this was a great book for introducing children to positive thinking, pride, being yourself and unicorns. OK, not unicorns. People also appreciated the "fun" rhymes. Which is sort of like saying the propaganda the Nazis spread during WWII was well written.

Ted Geisel passed away in 1991; maybe he was already checked out when this book was published? Maybe he wasn't overseeing books that were part of this series? I can't imagine he would have endorsed it. I don't even know what to do with this book because I can't bear to give it away and risk another child reading it. I'm not one to toss books, but this might be my first. For now, I'm hiding it in the attic.

A is for Aargh! B is for Boo! And C is for Come on, book publisher, stop printing this crap!
Ellen Seidman at 6:45 AM