A person with intellectual disability denied an organ transplant 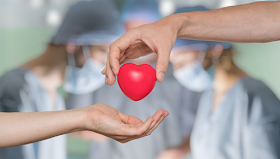 The other night, I was talking with someone about the tough time I went through after Max was born. I noted that nothing had prepared me for having a child with disabilities. Growing up, I didn't know any children who were disabled. Over time, I got the sense that society largely considered people with disabilities lesser human beings, and then realized it once I had Max. In the sixteen years that I've been raising him, attitudes and perceptions have shifted—but we've still got a long way to go, as is evident from a story making headlines.

In the fall of 2018, the Office for Civil Rights (OSR) at the U.S. Department of Health and Human Services received a complaint that involved an individual with intellectual disability, according to a statement the OSR released. This person was in need of a heart transplant, but an on-staff doctor at the University of North Carolina Health Care system had deemed they were not a good candidate for the United Network for Organ Sharing (UNOS) list. Why? Because of their developmental learning disabilities and the fact they do not live independently. The complaint noted that the person would eventually die without the transplant.

My heart ached when I read that. This person is similar to my Max, who has intellectual disability and who will likely not live independently as an adult. Max is a happy, enthusiastic, adventure-loving boy. He is full of life, and to think that anyone would deem someone like him unworthy of living is really, really hard to wrap my head around. To be sure, there are doctors out there who have a God complex. But it is not within anyone's right to decide who gets to live and who gets to die based on a person's abilities or their genetic makeup.

Sadly, there is a long history of denying people with intellectual disability organ transplants (here is a helpful guide for parents and other advocates). As hard as it is to believe there's a need to state something this basic, here goes: No person deserves a death sentence because of a disability.

Earlier this year, the UNC Health Care system agreed that the medical records of the person in need of the heart transplant would be amended, and it would be clear that they are eligible for placement on the transplant list. Also: The Office for Civil Rights will be providing assistance to them on the development of their transplant eligibility policy. i.e., teaching them to get a clue. Hopefully, the news about this case will make other health care systems think twice about any dubious decisions concerning people with disabilities.

Disability rights and doctors have been on my mind because last week, I chatted with disability advocate Sheryl Grossman, who was preparing to fight the potential legalization of assisted suicide in Maryland. Sheryl has a rare genetic condition. , "I know the societal barriers—stigma and discrimination—that we face," she's testified. "Our lives are often seen as being worse quality of life and less worth than others. Doctors' whole profession see us as broken and something to be fixed." She tells of a doctor who once said to her, "I don't understand why you want to live like this, in and out of hospital for years." The answer, Sheryl says, is "I love my life." It is wrong, so wrong, to judge the challenges people with disabilities deal with to be ones that completely obliterate their quality of life.

As parents of children with disabilities, we often see worth that other people may not. And yet, my news feed is filled with accomplishments. A woman becomes the first openly autistic person to practice law in Florida. A woman with Down syndrome finishes her third Austin half-marathon. A third-year student at William & Mary Law School with autism will compete to become the next Miss Virginia. A young girl with cerebral palsy walks the runway at London Fashion Week. And that's just the stuff I caught. Every day, everywhere, people with disabilities make a difference in this world. Even when they are not doing anything particularly notable and just existing (you know, like the vast majority of humanity), they have a right to life as much as any of us do.

The hippocratic oath that many medical students take states, "I will follow that system of regimen which, according to my ability and judgment, I consider for the benefit of my patients, and abstain from whatever is deleterious and mischievous." I'd say that condemning someone to die for having an intellectual disability is way more than "deleterious." As OCR director Roger Severino said, "Every life is precious and no one should be blocked from access to an organ transplant because of stereotypes about persons with disabilities."
Ellen Seidman at 6:45 AM