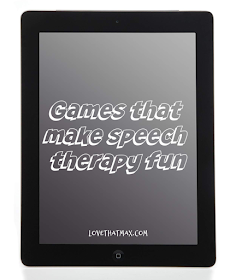 Speech therapy isn't always fun and games, but speech therapists in Max's life have tried to make it as enjoyable and engaging as possible. Over the years they've played games like Hedbanz and Zingo, used conversation cards, told stories involving fire trucks and other interests he has, used puppets, and tried bubbles and fun whistles. (This Pinterest board has a ton of ideas.) Apps can also make speech therapy exciting. (Here's one list of good ones and here's another.) Now there's a new trend: gamified therapy that utilizes technology.

I just read an article about a really cool game in the works, Amplify, geared towards children with cerebral palsy. It's an adventure game in which children move the story forward using voice therapy exercises. In one scene, patients get into a singing contest with the Phantom of The Opera and have to make an extended "ah" sound. Once they complete the sound, they can move on with the game.

Amplify will use the voice-assisted technology of Google's AIY Voice Kit. The University of Southern California brains who came up with the game are working on a prototype and then they'll trial it.
Ellen Seidman at 7:00 AM