We're not perfect, and we hope you like us that way 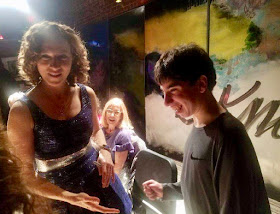 It is winter 2002. Max is a baby, I am home on maternity leave and I play the Laurie Berkner Band's CDs constantly. Her bubbly songs exude an optimism I do not feel. My baby had a stroke, and doctors have given us dire predictions about his ability to walk, talk or do basically anything. I watch Max like a hawk, looking for the slightest sign that anything is wrong. Why are his hands clenched like that? Why aren't his eyes tracking toys? Why why why why why?

I know that music has the power to heal, and I hope that Laurie's songs help Max's brain in some way. In my better moments, I sing along; Fruit Salad Salsa is one of my favorites.

But the I'm Not Perfect song pains me. The message could not be any more awesome, yet I am grappling with the fact that my baby will not be the child I'd expected. It's seeming like Max will be anything but perfect. I am freaked out by the possibilities of all the imperfects he will be. I cry as Laurie sings:

It is spring 2005. Max is taking steps on his own: On his third birthday, he toddles across his room from Dave's arms into mine. He is making great progress. Me, too: I no longer view him only as a child who isn't hitting his milestones. I see a cherubic, cheerful boy doing his best and making progress at his own pace. Laurie's songs are still the background music of our life at home and we encourage Max to move his little legs:

Max does not have many words and as I sing Laurie's songs to him, I hope the fun sounds will encourage his own:

It is winter 2018. I've scored tickets to Laurie's concert, and I'm so excited to take both Max and Ben. Ben loves Laurie's music, as did Sabrina. Max doesn't much remember her music from his younger days, and I wonder if the concert might bring back memories. Actually: We get to the theater and  Max declares that he is too old for her concert. "I'M LEAVING!" he announces, loudly. I remain calm. Because I know, better than anyone:

Max sits down sullenly with Dave, refusing to take off his jacket so he can make a fast getaway. As the concert gets going, though, he is mesmerized by Laurie and the band as they sing favorites old and new. At some point, he encourages Ben to move to the front of the theater and the three of us stand there together. I am starstruck. Laurie Berkner, right there, the voice of Max's childhood. 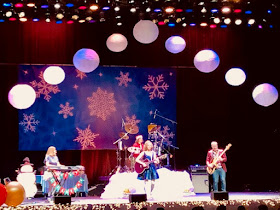 After the concert, we line up to for a meet-and-greet (thanks, Team Berkner). Max is getting antsy, so we distract him by talking about his desire to move to Orlando. We note that he can let Laurie know about his plans, if he'd like. Finally, we are ushered into a small room and there's the whole gang, sitting on chairs. Laurie! Susie! Brady! Bobby! Max is ready to run out of there but calms down when a little girl ahead of us plays ukulele for the band. She is a tough act to follow. When we step up and I introduce the boys, Laurie asks if Max would like to take a photo with her. "NO!" he says.
We're not perfect
No we're not
We're not perfect
But we've got what we've got

"Teens!" I say. I ask Max if he'd like to let Laurie know how old he's going to be on his upcoming birthday, and he proudly announces "Sixteen!" Sixteen whole years of defying the odds and showing me just how abled a person with disabilities can be.

I mention that we've been listening to her music since Max was a baby, and that Ben has enjoyed it for three years. There is so much more I want to tell her about how much her music meant to me when Max was little, but I know I'll get all emotional so I hold back. Ben is really into the ABC's and he whispers to Laurie that he'd like for her to sing the ABC song. She does, and the band joins in. Squee!

As everyone signs a card for us, I ask Max if he'd like to tell Laurie where he wants to move to. "Orlando, Florida!" he says, gleefully. "Oh, I have family in Florida," she says. Max appreciates hearing that. "Who doesn't want to move to Florida?" she adds, and Max beams.

Laurie's daughter, Lucy, snaps some family photos. And then we shuffle off, a smile on everyone's face. 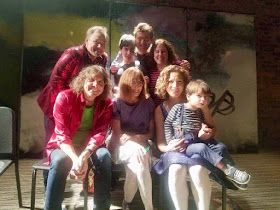