If disabled people could get around cities easier, they'd be more ordinary citizens 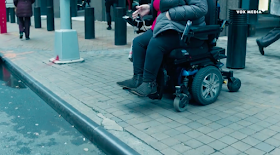 I watched an outstanding video the other day on whether the Americans with Disabilities act is still effective. It isn't, and that's definitely not a spoiler alert for anyone who is disabled or has a loved one with disabilities. Disability advocate and writer Emily Ladau showed, firsthand, how challenging it can be to get around New York City for the series Consider This. You'd think the Americans with Disabilities Act would have have made sweeping changes, but one challenge is that the law has no teeth. Emily showed a letter in response to a complaint she'd sent to a hotel chain that stated, "We do not have the resources to resolve all of them."

New York is an old, large city with a whole lot of building and transit accessibility issues. Filmmaker Jason DaSilva, who has multiple sclerosis, did a mini documentary on the transit situation called The Long Wait back in 2003. When comedian Zach Anner attempted to visit Brooklyn via mass transit in 2017, it turned into quite the pilgrimage.

As the mom of a young man with disabilities, I very much related to the part where Emily noted that since people with disabilities can't get out and about as much as they'd like to, others are sometimes astounded by the mere sight of them going about their daily lives. One passerby gushed, "That's beautiful!" when she spotted Emily and her boyfriend holding hands. Sometimes, I experience similar reactions with Max. "Does he go to school?" people will ask. "Wow, it's great that he can enjoy the park/the rides/ice-cream out with his family," they'll note.

"People could literally make it easier on everyone if they would stop viewing disability as a problem and start viewing it as an identity. We're not there yet," Emily noted. So true. So is comedian/actor Maysoon Zayid's point: "If we didn't have so many non-disabled people, life would be so much easier for everyone."

Image: Consider This video
Ellen Seidman at 6:40 AM