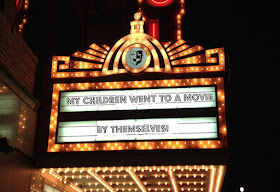 Max wanted to see Ralph Breaks the Internet again. That's his thing with movies—once he enjoys one, he wants to see it again and again. So far, he's seen Incredibles 2 nine times. Also: He now prefers to go without me or Dave. After he did that this summer for the first time, at his request, he's gone to the theater several times on his own now. Last week, he decided he'd like to go with Sabrina.

She was dubious. "I'm not old enough to go to the movies by myself!" she said. I pointed out that Max would be with her and she'd be at our local theater, which is literally a two-minute drive from our house.

"Come on, Sabrina!" Max said. He finally convinced her. And so, on Friday night Dave drove them to the movie theater. He bought tickets, got Sabrina popcorn and Sprite and left.

Max has come a long way from his first-ever trip to the movies five years ago (Monsters University). He used to be terrified of them. Now he was the one encouraging his sister to take the plunge and try something she'd never done: go to the movies without her parents. She didn't quite love it as much as he did, which mystified Max. Because he, of course, is planning on seeing it a bunch more times.

Whenever Max takes another step toward independence, I breathe a deep sigh of relief. But this was something more—he was being the mature big brother. Win win win win win.
Ellen Seidman at 9:39 AM