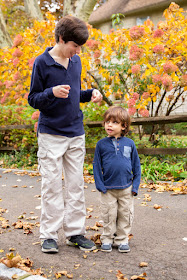 Max stood at the bottom of our staircase, shouting up to Sabrina. She was running late and we had to be at a local food pantry; our Girl Scouts troop was handing out Thanksgiving meals. Max knows that getting Sabrina out the door is a constant struggle, so he was trying to keep her on schedule before we had our usual we-need-to-go-now battle.

Dave was away on business all last week, and Max stepped right up to the plate. He chilled in the house alone when I had to drive Sabrina to a sleepover and he didn't want to go out. (As you can imagine, his intentions of moving to Orlando have intensified since a snowstorm hit last week.) He helped clean up in the kitchen after dinner. He saw me yawning one night and told me to go to sleep early.

My boy, who is going to be sixteen next month, is becoming so responsible. He's always been a caring and concerned type, but now he's taking charge. I only wish that people who don't know Max well, or at all, could understand his capacity for competence. It's one of the biggest misunderstandings of disability, this thinking that people like Max aren't capable of doing.

When Ben was having trouble finding Sesame Street on TV on Saturday morning, he handed the remote control to Max, who immediately located an episode for him. Ben is growing up seeing Max as the brother who takes care of him. (And annoys him, of course, because: brothers.) He perceives that Max's disabilities can pose challenges, but also that Max can work around them or ask for a hand if need be. That's an important life lesson for him because we all have our challenges, visible or not. He understands that Max's disabilities are part of who he is, not the whole of him...just as I would like everyone to see Max.

This morning, Sabrina had to catch her bus. Perhaps you've heard me shouting "SABRINA! YOU'RE GOING TO MISS YOUR BUS!" from where you live? Max sensed that I was about to lose it and once again shouted upstairs, "Sabrina! Let's go!" And when she didn't come down, a few minutes later he announced, "Sabrina! Bus now!" And then, just as I was about to chime in, he shouted, "Sabrina! Sabrina!" And she actually came downstairs. Max seemed to be enjoying himself.

Given Max's I'm-the-man-of-the-house streak, I figured I'd try my luck: "Hey, Max, are you going to help serve Thanksgiving dinner?" I asked a bit later.