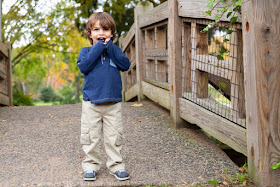 Two years ago, I went to visit a friend whose son had been sick. I brought Ben to cheer her up. As we sat in the kitchen, Erica pointed to Ben and said, "What's that on his neck?" Sure enough, there was a bulge. Ben was a chubby tot and I hadn't noticed it among his neck folds. It turns out it was a cyst or, rather, a macrocystic lympatic malformation. The mass was benign and relatively small, and it caused no pain or discomfort, but it needed to come out. Every time Ben got a cold, we had to watch the area to make sure it didn't turn red, a sign of an infection that could have proved dangerous.

In another it-takes-a-village moment, a blog reader, Susan, emailed to say she knew a doctor who might be able to help. Well, that excellent doctor knew the guy in New York City who treated such things, and it is he who will be doing the procedure today. It involves injecting a minute dose of two chemotherapy drugs into Ben's neck to shrink the cyst, hopefully to nothing, although there is a chance we'll need to do a second round. Ben's discomfort, we were told, would be nothing that Tylenol couldn't soothe. We'll be able to see if the cyst is gone only after two weeks go by, once all the neck swelling decreases.

We've told Ben that the nice doctor is going to be taking the bump out of his neck and that he will be sleeping, and when he wakes up he will get a lollipop. He keeps asking about the lollipop, and I appreciate that he's focused on what's important. Max cried this weekend when he realized the surgery was coming up, but we've continuously reassured him that the doctor is very good and that Ben will be fine and he's calmed down. Sabrina remains worried.

The doctor, Alejandro Berenstein, has performed hundreds of these procedures. He actually pioneered the field known as interventional radiology. I have complete confidence in him. And yet, I am terrified, starting with the fact that little Ben has go to under anesthesia. And that chemicals used to kill cancer are going to be injected into my baby's body.

So please send my little guy good vibes and prayers—we’ve got the lollipops covered.
Ellen Seidman at 6:30 AM