Sometimes, we don't have the answers but our children do 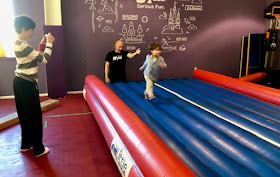 Ben's third birthday party was last weekend. We were a little worried about how Max would behave, given his meltdown at the family birthday dinner we had for Ben a few weeks ago. We spoke with him a number of times about Ben having a special birthday day, just like Max enjoys special birthday days. We told him he could bring his iPad and hang out in a quiet room. We figured we could tap my sister to chill with him if need be. In the end, Max had the best idea of all.

The party was at a kiddie gym, right up Ben's alley: His favorite activity at home is moving the little ottoman in our living room close to the couch then leaping off it. Max was pretty excited about the party, too. A couple of people on staff remembered us from ten (TEN!) years ago—we'd had a joint party there in 2008 for Max's fourth b-day and Sabrina's third.

Soon, Ben's preschool friends showed up and they zoomed around the gym, tumbling on the mats and swinging on the bars. Then the guy in charge brought out a giant rainbow-colored parachute and kids grabbed hold of the loops on the edges, floating it up and down. 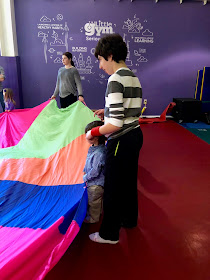 Max stood right behind Ben, encouraging him to hold on. After that, the kids started tossing basketballs and I lost track of Max...until I realized he was standing to the side, taking videos with Dave's camera. That's what he did for the rest of our time in the gym. 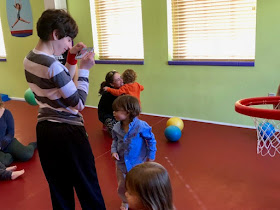 And there you have it: Max voluntarily took on the job of recording the party for all posterity. I instantly realized that we should have put him in charge of something, tapping into his pride for being helpful and being a great big brother. We were in parent autopilot mode, doing what we've always done for busy, noisy events: making sure that Max stayed calm. Max has matured—clearly, we have to as well.

When it came time to blow out the birthday candles, Max bent over to help Ben, who was determined to do it himself though he came dangerously close to setting his train conductor hat on fire. I averted disaster by sneaking in a blow. Then Ben sat down to enjoy his birthday cake, shoveling it into his mouth as fast as his hand would go. Max sat next to him and smiled happily at his little bro. 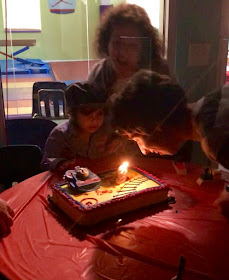