The priceless gift parents can give their children 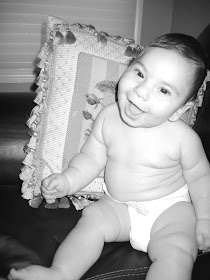 On the heels of Black Friday and Cyber Monday, I'm here to share one of the most priceless gifts a parent can give a child. I learned about it the very hard way nearly 16 years ago, when Max was born. He had a stroke at birth, as longtime readers of the blog know, a large, bilateral one. Grim-faced doctors told us the worst: Max might never walk or talk. He could have cognitive impairment, as well as vision and hearing problems. Although they did not mention cerebral palsy, Max was at major risk for it.

Until we had Max, my husband and I had no idea that itty, bitty babies could have strokes. But our first child did. As devastated as we were, we found some solace in taking action and getting him as much therapy as possible. We knew, from conversations with a renowned pediatric neurologist and our own research that the brain makes vital connections between 0 and two years old, so it can better process information and enable movement. (Basically, your brain sends messages to every single muscle in your body informing them how to work, from your tongue down to your toes.) Max was still in the NICU when I reached out to our local Early Intervention program to schedule an assessment.

From a month old and on, Max got physical therapy. During his first year we added occupational therapy and speech therapy. We tried craniosacral therapy, along with hyperbaric oxygen treatment and—when he was closer to two—hippotherapy (horseback riding therapy). If it couldn't hurt and it might help, we tried it.

Max is doing so much better than those gloomy doctors predicted. He walks, he has speech and communicates through his iPad, his hearing and vision are fine and he is bright, funny, intuitive, determined and so full of life and sunshine and milkshakes. While some of his progress is just plain luck, a matter of where the stroke struck his brain, I am certain that those early therapies enabled him to develop at his maximum capacity. As unlucky as it was that Max had a stroke, if it had to happen, we were very lucky we knew about it at Day 4 of his life and could act on it. Some parents don't discover strokes their children have had strokes until they are delayed.

I know how hard it is to acknowledge that a baby isn't developing the way he should, especially when you have a child who is otherwise healthy and not at risk for anything. But reaching out to a pediatrician to discuss your observations and concerns is a vital first step. Cerebral palsy typically isn't diagnosed until age 2 (and studies show the majority of kids with autism aren't diagnosed until age 5). The earlier a child is diagnosed, the earlier it enables them to get help during a critical period of neurological development.

Here's a video about a little guy, Owen, who was diagnosed with CP at 6 months old and his parents, who are determined to do whatever they can. Sound familiar?

I realize I'm mainly speaking to moms and dads here whose children already have diagnoses. Still, if you share your story with parents in your circle, it could spur someone whose tot isn't meeting milestones to take action. It's medically proven: The sooner a child gets help, the better. This is all why the Cerebral Palsy Foundation now has an Early Detection Initiative. The nonprofit is working with five renowned medical institutions around the country to lower the average age of CP diagnosis to six months: Kennedy Krieger in Baltimore; Nationwide Children's Hospital in Columbus, OH; UCLA Medical Center in Los Angeles; University of Texas Health Science Center in Houston; and University of Utah Medical Center in Salt Lake City.

Please join me in supporting this campaign, a cause so close to my heart; click here to make a donation. A donor will be matching Giving Tuesday gifts up to $150,000.
Ellen Seidman at 6:40 AM