What you won't imagine about your child 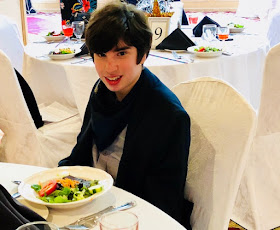 When Max was a kid, our dining options were limited to a greasy spoon near our house. It was the only place where Max felt comfortable, likely because there was no din there and the servers knew him. He liked to sit in the same spot every time: the booth closest to the bathroom. The waitress would just take us directly there when we showed up.

It's impossible, when you are immersed in the realities of your child's challenges, to imagine that they could significantly improve or that life won't always be the same.

Maybe the doctors at the hospital or some specialist you met deflated your expectations; Dave and I encountered our fair share of grim doctors speaking their gloomanddoomspeak. Maybe you have learned to take baby steps of hope—if only he'd grasp an object, take a bite, sit up for a bit, move his legs a little, speak a syllable, poke his head into the event or activity before leaving—because you've accepted that development happens in inchstones, not milestones. Perhaps you dare not wish for any more or you risk despair should your child not achieve.

It's not that I couldn't imagine Max's successes; it's that I wouldn't let my heart and head go there.

These days, Max not only wants to visit new restaurants, he wants to go all the time. His preferences: steak and sushi, making him the most high-maintenance food person in our family. For his birthday in December he is already planning a trip to a fancy steakhouse to celebrate. For now, the occasional chain steakhouse will do.

Meanwhile, Max has also gotten into the habit of having two dinners, because #teen. Around 7:00 p.m. or so a few nights a week, Dave and Max will head out to Home Depot, aka Max's home away from home, where he checks out appliances for his dream home in Orlando. Lately, I've gotten calls from Dave around 8:30 to say that they are at a diner. "He's eating my food, too," Dave will text.

I. Would. Never. Have. Imagined.

In June, when I dropped Max off for his first prom, I left him seated at his class's table. There was a salad in front of him. Max doesn't eat lettuce—it's really hard for him to chew. There was a big slice of cucumber and tomato, too, choking hazards. I could have cut them up for him but figured that he didn't want me to do that in front of his friends. So I decided I'd hail a server and see if they would serve him chopped up cukes instead.

I leaned over, kissed him goodbye said, "Max, don't eat that salad, OK? See you later."