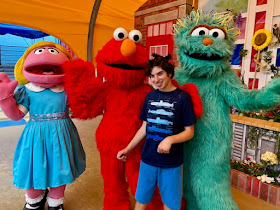 We took Ben to Sesame Place this weekend. I mean, Max and Sabrina were there to enjoy themselves, too, but we were all so excited to introduce Ben to its wonders. I think it's been a good eight or nine years since we were there with our olders. It turned out to be especially magical for all of us.

As soon as we walked into the park, Max and Sabrina spotted the Vapor Trail junior roller coaster and decided to go on ti. This was groundbreaking—Max has a history of being terrified of roller coasters. When he was Ben's age, we couldn't even coax him onto the rides. He came off, grinning, not a hair out of place since his counselor at camp had put it up into a bunch of ponytails, at his request.

Ben was awestruck, so much so that at first he barely cracked a smile. It was like he was in disbelief: I GET TO MEET ELMO?! AND BIG BIRD? AND GROVER? AND GO ON RIDES? AND RUN AROUND IN AMAZING SPRINKLERS? My friend Carrie knew the phenomenon well—she and her husband called it "Sesame Place Face." 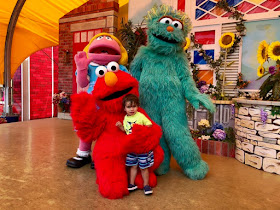 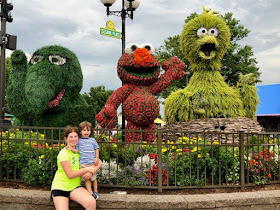 For our two days there, Dave and I operated in Divide and Conquer mode—typical for our family on trips. He went off galavanting (as he likes to say) with Max, and Sabrina and I hung out with Ben. We met up for meals, shows and to go on some rides. Max couldn't get enough of Elmo the Musical Live!—he and Dave returned to see it once again. 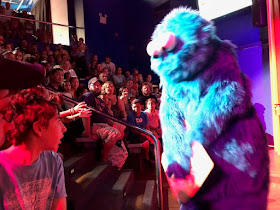 Cookie and Elmo have got moves! The chickens, too. 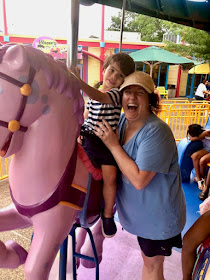 Good times on the carousel 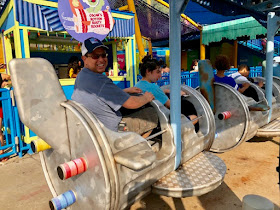 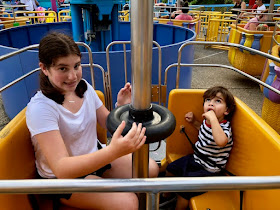 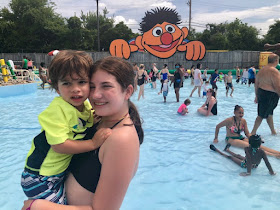 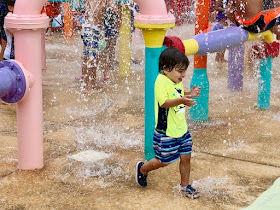 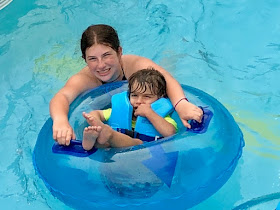 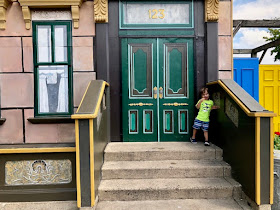 The house from Sesame Street! 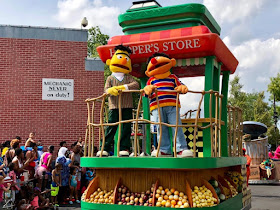 The parade was thrill after thrill—OMG, Big Bird! Abby Cadabby! Oscar! A friend noted that Ben was the perfect age for Sesame Place, but evidently I am the perfect age, too, because I was seriously excited to see Ernie and Bert.

Happily, there was good ice-cream to fuel us as we dashed around or, rather, as Ben dashed and Sabrina and I trotted after him. I checked out the park's new quiet rooms, located by the Rambling River. They are small, air-conditioned rooms, with adjustable lighting, an armchair and a maze puzzle to help over-stimulated kids chill out. 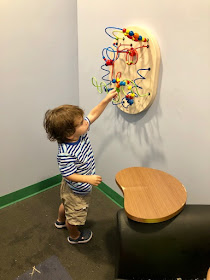 As we bounced around, Dave texted that Max had decided to try out the giant roller coaster, Vapor Trail. And he loved it. He went on it another five times, and when he saw me, he was gleeful. He did a wave hand motion, his word for roller coaster. When he was little and we went to theme parks, he used to do that with a look of terror on his face—as in, keep me away from that thing. But now, he was so proud of himself. There is no "Child will ride on roller coaster" developmental milestone. And it's not as if I was eagerly awaiting him to do it, after all these years. But it was pretty awesome. 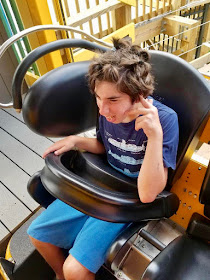 We left the park pooped, but exhilarated. When we got home that night, I showed Max the photo of him with Cookie Monster. He was about 18 months old, and I was pregnant with Sabrina. I remember telling Cookie Monster to hold Max carefully, because he wasn't yet supporting himself so well. Max smiled at himself in the photo.

"Roller coaster: no," he said, gesturing at the picture, and made the up and down motion with his hand. "Now, yes!" 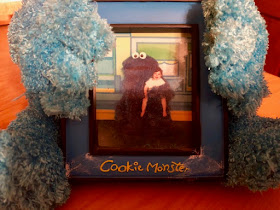