What it's like to star in a Target ad: scoop from the mom of a child with disabilities

This guest post is from longtime online friend Natalie Hammer Noblitt, a mom of three based in Los Angeles's San Fernando Valley. Her oldest, 10-year-old Nicolas, is "positive, friendly and curious" she says. He's also one of the first children with disabilities—Nic has cerebral palsy—to star in Target back-to-school ads, currently running on major TV networks, cable and at movie theaters, too. Here, Natalie gives the backstory.

Five years ago, we moved from Chicago to L.A. for my husband's job, and I discovered that there are quite a few families here who have kids in the entertainment business. I joked about getting the kids into modeling and acting. Nic has always enjoyed being in front of the camera—he's taken dance, baseball and swim therapy at California State University, where he’d often get chosen or volunteer to speak about his experiences. He became very comfortable using a microphone and speaking to the group. 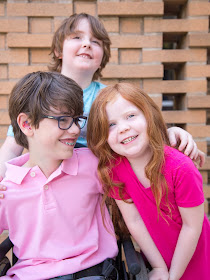 Nic with siblings Eliza, 5, and Nathaniel, 6

Inclusion has been our family motto for a long time. One of the reasons we were excited about moving to California is the state’s reputation for being very accessible to wheelchair users, something we struggled with as Nicolas neared school age in Illinois. But accessible doesn’t always mean inclusive. We’ve experienced many challenges getting Nic the support he needed at a general education public school. His neighborhood school told us up front they’d never dealt with a child in a wheelchair or walker before. Other families at school sometimes didn’t understand why he was mainstream and wondered if the expense of his supportive services him might take away from their children’s resources. Even in a very open minded and well-funded school, misconceptions persisted.

We wanted this for Nic—and other children like him—because we haven't seen many images in the media that represented them. That has begun to change in the last couple of years, but when Nic was small we would get so excited any time we saw a child with a wheelchair in a commercial or on a TV show. As a family we loved the idea of letting Nic pursue his talents, and also show others that kids with disabilities want to be social and involved. We knew if he could be embraced by the media it might also help other kids feel they are visible, too. Social challenges also exist when your child is the only one at his school with a visible disability.

We started asking around about agencies Although there are agencies in LA that are known for working with kids with disabilities, we ended up approaching DDO Kids because we’d heard great things about their agents from other families. A traditional kids talent agency seemed to make sense so Nic would be considered for roles that both called for children with disabilities and ones who weren't asking for those characteristics. I’m not aware of other children who have a visible disability among the roster of children they represent.

The agency signed Nic in the summer of 2017. Next we got headshots taken, signed up for all the casting sites where actors and models need to be listed (which all require monthly or yearly fees), and got a work permit from the state of California. Grades and attendance are important factors in getting approved for a minor’s work permit. When you are a child with complex medical issues — needing to take time off to see specialists and have procedures done during the school year — your attendance doesn’t always look perfect. We had to work with the permitting agency and show them Nic's IEP before we could get his work permit approved. (We go through that process again every six months to keep it legal for him to work.) These are some of his professional shots, taken by photographer Kendra Kabasele. 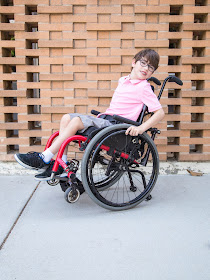 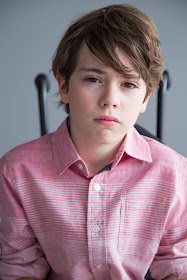 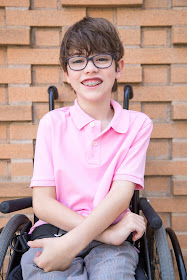 Nic started auditioning for commercial and theatrical parts right away. He enrolled in acting classes for children wanting to act in commercials, TV and movies. He had a blast and wanted to keep going, so we felt we were on the right path. The classes led to meeting his manager, April Baker of Stagecoach Entertainment, who joined his agents as part of his representation. She's helped us build relationships in the industry, and also happens to be the manager of one of the other kids in the Target commercial.

The first commercial Nic booked was a Burger King spot that ran in Mexico and Turkey. At the beginning of 2018, he booked a role in a print campaign for a major sports brand (yet we still haven’t seen the results of that work). Later he landed a Nickelodeon summer promotion role, but the final cuts only show him very briefly. DDO Kids submits him for all kinds of roles appropriate for his age. He’s auditioned for TV shows, movies, commercials, print jobs and online content.

You never know how a project is going to turn out, or if you child will be cut altogether, so we all have to be patient and not be disappointed if something doesn’t turn out the way we think. We’ve explained to Nic that while he can have a lot of fun doing these auditions and projects, it is a job and professionalism and hard work are expected if you want to keep getting roles. It’s taught him about saving money, paying taxes and a lot of other really practical skills that will be good for him later in life. (Because we live in California, child actors working in the industry are subject to special laws that protect kids on the amount they can work and where the money goes—money put into a special account can't be accessed by anyone except the child when they turn 18.) Nic also really enjoys seeing all the behind the scenes work that goes into putting together a commercial or film project.

We’re a Target household, and Nic’s entire outfit the days he auditioned for Target came from the store. We were so excited when we got the call from his agent that he got the gig—he popped a wheelie in his wheelchair! He’d been doing this for a year and sometimes auditioned for projects 5-7 times a week. I reminded him how much work he’d put in to get to this point.

The crew and director were all so accommodating and kind when we filmed at the end of June. The director wanted to take Nic’s wheelchair use into consideration: He’d have Nic show how fast he could get from one point to another, and learned some of the nuances of wheelchair use. He realized Nic needed to take time to put on his wheelchair brakes if they wanted him to stay still. Nic was proud to show off his speed and spinning ability. He was supported and cheered on for motivation just like all the other kids were. The two outfits Nic wore in the spot were tailored to fit him just right. I went out and bought them at the store’s as soon as they were in stock because they had become so meaningful to us. 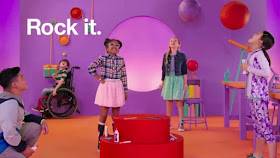 Nic's favorite thing on set was getting to meet the other child actors—and of course the food from craft services. Who doesn’t love a good buffet and plentiful snacks?! I really enjoyed meeting the parents on set or at auditions, sharing tips and just connecting. 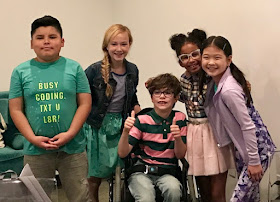 Nic and friends on the Target ad set

Being the parent of a child with a disability can be isolating, but I’ve experienced so many warm, open parents of other child actors. We’ve connected on social media and everyone is so supportive. Still, we’ve also gotten some reminders about why it’s important to show that kids with disabilities can do this. Some people have made it clear they think the commercial was a “pity hire,” or questioned Nic’s ability to perform and memorize lines. That’s truly not the case.

Nic works very memorizing lines when needed and has learned to be incredibly professional. He goes in to all the auditions by himself, without my help, answers questions from the casting directors and has a real sense of why he wants to do this. Our family juggles a lot to make the auditions happens, and I help promote him online because many casting directors now want to see kids with a social media following, or use it as a visual resume to see what kid actors do in their free time.

We will only work with projects that we feel have the right message and motivation. And we love to see directors putting disability-specific roles into projects to make the cast better represent all families. Another cool thing is Nic has inspired his younger brother and sister to try acting. We’ll see if his siblings enjoy it as much as he does!

Nic first saw the Target commercial at the end of July, when we were visiting with my sister in Colorado. He was so excited. "It turned out a lot cooler than I imagined," he said.

I've asked Nic what he enjoyed about the experience. "It's very fun and exciting to be on TV and know that people might recognize me," he said. "Even if you look different than everybody else, it's good for all those different types of people to be seen on TV. If people see kids in wheelchairs it might be good for them. Sometimes I know kids make fun of others who are different."

Yesterday we had a meeting with Nic's agents and without my asking him to, he thanked them for helping him get some really fun jobs. They asked how he thought he looked in the Target commercial. He said, "I think I did awesome."

Images of Nicolas alone and with siblings by Kendra Kabasele
Ellen Seidman at 6:40 AM