Is it teen 'tude? Disability? Wha? 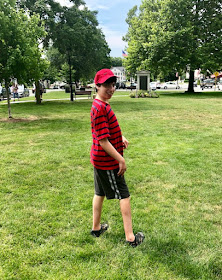 "I have a video he made for you but it's mostly him telling his counselor he hates him because he told him he wasn't going to family camp," the camp director wrote me last week. Evidently, Max wasn't happy that following his stint at camp, he wouldn't be attending the five-day family camp that started a few days later. We'd been to it a few times, but couldn't make it this year.

I immediately apologized to her for his obnoxiousness, and explained that when he's said that at home, we tell him that saying that makes people feel bad. Her response: "Don't worry! When he tells us we tell him we love him."

A teen telling his mom "I hate you!" is nothing new. I've got two teens throwing that shade on me. But Max has said it to a couple of his therapists when he wasn't in the mood for therapy. And then he said it to a counselor he actually really likes. And I've had that same conversation with him, but I'm not sure if he's just ignoring me or he doesn't get it.

In general, Max's has a good emotional IQ—he's always readily sensed when Dave or I are upset, and he's eager to make people happy. But his sense of empathy is still coming along, along with his internal filter of what's OK to say and what's not. That has to do with his level of cognition, I think. Yet I'm not sure—maybe he's just being an obnoxious teen.

I hate blaming stuff on his intellectual disability when it could just be a personality thing. Sabrina, who's 13, may not tell people who aren't me that she hates them, but that doesn't mean another teen who's typically developing wouldn't. Either way, we'll keep calling Max on it.

Max came home from camp yesterday and we went out to dinner. He is hell bent on going to Disney World, and he asked Dave to help him look up flights in September. That's not going to happen, but Dave let him scroll through upcoming flights anyway.

"Max, you have school!" Dave reminded him.

"Guess you'll be going to Disney by yourself!" Dave answered.

"You won't be going anywhere if you keep saying that!" I said.