We did something right with this parenting thing 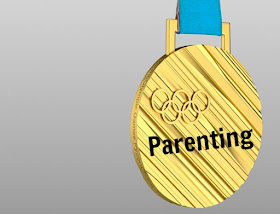 Unlike school, work and the lottery, you never really do know the results of your parenting skills. I mean, you try your best to raise your kids right and do well by them, but there's no measured way to tell how you're doing. Except for those moments when they do something that blows your mind and you think, we must be doing something right. Dave and I had one of those moments yesterday.

I'd emailed Sabrina's camp director to ask how she was doing. She wasn't entirely thrilled about the bunk she was in, plus it's been seriously hot and she doesn't do so well in the heat; I had to send her a fan. He called and said the heat had broken, and that he'd spoken with her and she told him she was happy. We talked about the upcoming visiting day, and I asked if Max might be able to get a golf cart ride. I explained that he had disabilities, and that although sometimes he gets tired walking around camp, he really just loves golf cart rides.

"I think that's possible—find me and I'll arrange it," the camp director said to me. "He has cerebral palsy, right?"

He said, "I only know that because Sabrina told me, I'm glad we're talking because I meant to call you and tell you what happened." He proceeded to tell me that the other day, she had seen him, pulled him aside and told him that he needed to start a program for youth with disabilities at the camp. "That way, my brother can go here," she said. She noted that other branches of the camp have these programs; Max attends one in another state.

My heart caught. Sabrina and Max are like any siblings: they fight and get on each other's nerves. Sometimes they're sweet. She doesn't treat him particularly special, although she is there to lend him a hand when he needs it. A few weeks ago, for the first time Dave and I went out to dinner and left the kids at home with Sabrina, who helped Max get into his pajamas at bedtime. I was careful to make sure she was up for doing it, and she was—it was no big deal.

For the past year, Sabrina has been volunteering at a monthly temple service program for adults with disabilities. She started doing it as her bat mitzvah community project, and has kept it up. She also volunteers with The Friendship Circle, which offers programs for youth with disabilities—Max has been a regular there for years. I know of a lot of people who've become teachers for students with disabilities and therapists because they had family members with disabilities, and I've often wondered if that could be Sabrina someday. It was seriously amazing to find out that advocacy runs in her veins.

"Oh, and she knew that it would take money to pull off because she said to me, 'My parents know people with a lot of money and they can help!'" the camp director continued.

That made me laugh; I had no idea who she meant.

"It was one of my best moments as a camp director," he told me.

It was one of my best moments as a parent.

I'd actually had a conversation five years ago with someone who runs the camp's inclusion program. He basically said it wouldn't work for Max, because he needed life skills help and an assistant I'd have to find. He didn't sound positive about it. The program was geared toward more independent youth with disabilities who didn't have physical challenges. Max was turned away from a few camp programs for the same reason. I was disappointed, disheartened and frustrated, but didn't push back—if a camp didn't feel prepared to handle Max, I didn't want him there.

And then, a woman I met through the blog ended up starting a program at another branch of the camp. Max was literally one of the first campers admitted, and this will be his third year there. He is the only camper with cerebral palsy, and it hasn't mattered—they've made it work for him. See: Where there's a will, there's a way.

Sabrina's camp director and I spoke about the possibility of a program. He said he wanted it to happen, but the camp was at capacity. I noted that the other camp had built a bunk, and he said they were literally out of space. He felt confident he could get the funding, however, and joked that Sabrina could be in charge of development. He said they'd soon be working on goals for the camp, this would be one of them and that he hoped to figure it out.

I'd been in the car with Dave when I got the call. After I hung up, I told him the story.

And he smiled and I smiled and we drove on, beaming with pride.
Ellen Seidman at 6:40 AM