On trying to be a superhero to your children: Max sees Incredibles 2 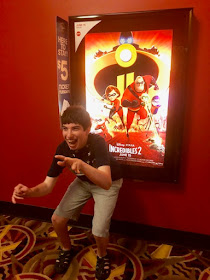 I am a crappy mother. Why? Because I insisted that Max see a screening of Incredibles 2, even though he resisted. Only now he's saying it's his new favorite movie.

Like me, Max loved The Incredibles. He's been watching sneak peeks of Incredibles 2 since the official trailer came out on YouTube in April, and literally counting down the days till its opening this Friday. And so, last month I reached out to a contact at Disney•Pixar I'd met years ago at a conference, and asked if there might be a screening we could attend. There was—on Monday.

I was gleeful when I announced this to Max.


"Max, don't you want to see Incredibles 2 first, before everyone else?"

The thing is, Max had his own plans to see it. He was going to head to New York City, sleep over at my sister's house and hit the theater with her and my niece. And when his school offered an afternoon trip to see it next week, Max wanted to sign up for that, too. So in his head, he was already set. And my exciting offer to see it in preview just wasn't so exciting for him, although Sabrina was seriously psyched.

You'd think I'd know better by know than to project my own idea of fun onto Max. A preview! Of a major movie! How could he resist?! Sometimes, though, you get so excited by the idea of surprising your children that you push reality aside. And the reality of how Max's brain usually works is this: he creates plans, then sticks with them. And seeing the movie before it opened wasn't part of his plan.

I kept asking Max if he was sure he didn't want to go. He didn't. I was bummed. Lately, though, Max's mindset has become a little more flexible. I wondered whether he would change his tune, and sure enough, last weekend he did. Y-e-s, he wanted to go.

And off we went on Monday night to an AMC 30 minutes away. Max wanted to sit next to Sabrina, not me (#teen). He giggled throughout the movie, especially in scenes involving Jack-Jack; the baby reminded us all of Ben (well, other than his ability to transform himself into a fireball). When the family got a new place, Max leaned over excitedly to say "They moved!" because he wants to move (to Orlando).

The plot was amusing, clever and grip-your-seat thrilling. The characters were funny and relatable. Helen Elastigirl Parr was her usual feisty self. Bob Mr. Incredible Parr took a turn as a pooped out stay-at-home dad when Helen got an Elastigirl gig. (Sabrina and I both poked each other when, as Bob struggled to help son Dash with homework, he griped about how math isn't done like it used to be—that's our story, too.) Frozone was around, with his off-the-camera wife giving him her usual earful. My favorite character, Edna Mode, babysat Jack-Jack and made him a cool costume. Together, the family fought evil, continuously sparring over who should hold Jack-Jack as they zoomed around.


When the movie ended—and it was so good none of us wanted it to end—Max reminded me that he was going to see it two more times! In the car ride on the way home, he and Sabrina named their superpowers. Max said he was strong. Sabrina said she could text with amazing speed. I decided to not ask what they thought mine was, because Sabrina would have surely said "nagging."

We talked about what happened in the movie, and Max kept saying a word I didn't understand. Then I got it. Some people in the movie (non-spoiler alert) had come under a spell, and Max was saying they'd gotten sick and then better. That was his understanding, and that's the magic of movies like this: they can work on many levels. Then Max again pointed out that the family had moved to a really big new house, and he was also going to move to a big house in Orlando, and he threw up his arms for emphasis.

"Aren't you glad I kept asking you to go?" I asked.

And I felt super-satisfied. 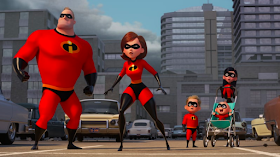