Guess who marched in our town's parade 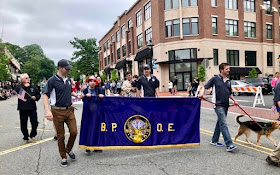 I called our local fire station last week and left a message for the chief; Max was hopeful about riding in a fire truck in the town's Memorial Day parade. I didn't hear back, so we stopped by the station early yesterday morning.

I'd told Max I wasn't sure it would happen, but I knew that he thought it would. Flexibility is not one of Max's strengths; when he gets something in his head, he assumes things will go the way he imagined them to. Max even put on his firefighter hat. He stopped wearing it all the time a while ago, and now reserves it for special occasions.

The guys at the station greeted Max by name, and one of them grabbed the chief. "No, sorry, we can't do it because of liability issues," he explained. If the department got a call while the truck was in the parade, it would have to book out of there. Max couldn't be onboard (although it is his ultimate fantasy to zoom to a fire).

"Awwww...." said Max, who got the gist that the answer was "Sorry, bud." I asked if they would honk at him as we watched the parade, and they said yes. These guys are the best; for his twelfth birthday, they gave him a ride in his favorite fire truck to his birthday party. I still watch the video from time to time—Max was so ecstatic.

Not this time. He trudged out of the station, bummed. We grabbed some bagels, then parked at the start of the parade, where the fire trucks were getting ready to roll. Max dashed over and waved hello. Then he spotted our high school's marching band, and got it into his head that he was going to help hold the banner.

"No, Max, you can't do that," I said, as he grasped the banner and the two high schoolers holding the ends of the pole looked on, perplexed.

Max was on the verge of losing it when Dave yanked him away. And then, we spotted the Elks Club crew. Our local lodge is quite amazing. Every year, they sponsor youth with disabilities for a summer camp program, and Max has been a lucky beneficiary for several years now. They also host a great holiday party, and generally know how to have a good time. I spotted my friend Annemarie, a member, and mentioned that Max wanted to march in the parade. And just like that, he was in. When it was the Elks' turn to go, he grabbed hold of the banner.

The two guys holding the banner on either end had a lot of patience, because Max was pulling back on the pole, for support. But on they marched. Max was so excited. Ben was on Dave's shoulders, also quite pleased. 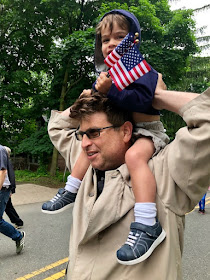 Max walked the entire route, which was about a half mile or so. He kept turning around when the fire trucks honked their horns. At the end, when the trucks pulled up after us, Max dashed over and informed the guys that one of the trucks had a new horn. It turned out the entire truck was new. Max pointed out that the siren was in a different place and that there was a new decal, impressing everyone with his observation of detail.

I was seriously impressed with how the morning had gone. There was huge progress from last year's Memorial Day, when Max lost it at a parade. As we left, Max asked, "Next year?" And then, later in the day, he told me again that he wanted to be in the parade. And he said that he didn't want to ride the fire truck—he wanted to walk. 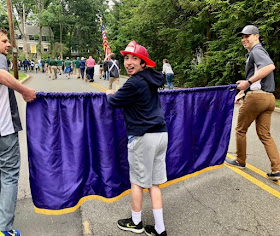