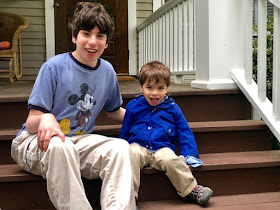 "How are people going to understand you if you don't use your iPad?" I asked Max last night.

We were driving home from a school event where he got to paint pottery. He'd chosen a gumball machine, a teacher told me. Except when Max mentioned that in the car, "gumball" was impossible to understand. I told him that I knew what he'd said only because I'd been told.

"Max, you can definitely talk but sometimes the words are not easy for people to understand," I said.

"I hate the iPad!" he responded.

For a while now, Max has been resistant to using his speech app to communicate when he's around us. Max doesn't just want us to understand him, he expects it. And that's a problem, because often his speech isn't that easy to understand. He does vowels pretty well but consonants other than "m," not so much. At times, he gets frustrated with us. At times, I get frustrated with him for refusing to use his speech app, and frustrated with myself for not understanding him. When we reach an impasse, I'll either ask him to verbally spell out the word he's saying or to type it on my phone.

Max has a tendency to repeat things, which comes in handy as once I know how he articulates a word, I know it for good. "I'm moving to Orlando!" is one of his favorite phrases these days. (For the record, he's only moving in his dreams.) And of course, when he declares "I hate you!" to me to be annoying, it's pretty clear.

There is one person in our household who regularly gets what Max is saying. That would be Ben. Dave and I joke that Ben speaks Max. I guess it's like growing up with a second language in your house—it's the most natural thing in the world.
Ellen Seidman at 6:35 AM