The five types of children 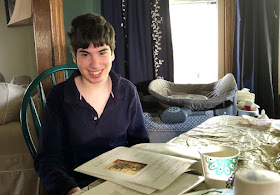 Every Passover, when we have our first seder (the traditional meal), read the haggadah (the telling of the story of the exodus from Egypt) and get to the part about the four types of children, I think about Max.

As the telling goes, there are four types of children, each of whom views the seder in different ways: the wise child, the simple child (who is curious, wide-eyed-and wondering), the defiant child and the child who does not know how to ask. For years, Max was the last child. Then he became the fifth child: the sensory meltdown child.

A few years ago, he began sitting at the seder table. Last year, he sat through part of the first one before asking to be excused, then stayed for the second. And this year? Well, Max was the defiant teen. He started roaring right at the start—yes, roaring—as our extended family tried to make it through the haggadah.

"I hate holidays!" he declared.

We tried to ignore him. We asked if he wanted to just sit in another room by himself. Nope. He wanted to roar.

Oh, he knew what he was doing. "It's his way of being a teen," Dave said. I wasn't accepting that. I told Max he had to go outside if he wanted to roar, because he was scaring Ben and the other kids. Then I made him go out on the porch, except he roared and banged on the door. Nothing was helping; he just stood around roaring, until I got up to serve more food mid-meal and Max slid in my seat and cracked up. We all did, and it felt good. My nerves were pretty frayed.

I worried about the second seder. I let Max know ahead of time that he was free to sit in another room and chill. He hovered nearby as we started, then he decided to join us. While he didn't want to eat, he chatted. He was excited that April was coming, and it would be getting warmer. He discussed plans for next Passover.

Hmmm. I guess he is the wise child, after all.
Ellen Seidman at 6:40 AM