I am his trusty translator, but I will be glad not to be 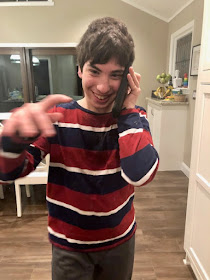 "I hope she feels better!" Max is saying into the phone. He's talking to a relative who has an ailing mom. I can hear the man saying, "What, Max? What?"

And so I lean over and say into the speaker, "He said he hopes she feels better."

Max does not much like to use his iPad speech app, TouchChat with WordPower, at home. He feels that people in his family ought to understand him, although he knows that we don't always, and that his app makes it easier for others to know what he is saying. (He does have an incredibly clear way of saying "I hate you!" to me. Of course.)

Over the years, we've been known to tease Max about the way he repeats himself, in the hopes that we'll finally get what he is saying. (See: Want to buy a monkey?) As he gets older, though, it's getting more important for him to understand—or, more importantly, accept—that his words are not always understood, and he needs augmentative assistance.

Max is getting a little better about this. He goes to a teen night program at his high school where students from another school visit, and Max has been asking to take his iPad along. One night, he also brought copies of cards from the conversation game TopicTalk. But at home, he wants us to understand him, and that is not always possible. In fact, Max used to think that it was our problem, not his, that we didn't get what we were saying. He used to lean in closer and shout stuff into my ear.  He doesn't do that as often anymore.

When we're out and he doesn't have his iPad on him, I translate for others:

OK, I didn't say the latter, which Max said to someone in our neighborhood who's bald. Thankfully, the guy didn't understand him, and I later had a discussion with Max about Thoughts You Keep On The Inside.

I am always there for Max. But we are getting to the point where I'd prefer to not to serve as his faithful translator so he'll use his speech app, and be more independent about communicating. I do realize that it is not the most fluid form of conversation to have to type out words. I have high hopes for voice-recognition software like Talkitt, which has been in development for a while. I'm realistic about Max's speech potential: While he continues to make some progress, his articulation will forever be challenging for others to understand. The stroke he had at birth caused this, as it can in adults who've had strokes. But for sure, I am grateful for the speech he does have, and the various ways he expresses himself—with typing, gestures, nodding his head, shooting me dirty looks.

I can't always be there to be his translator, especially because this job just doesn't pay very well. No, really, I have a feeling that as Max matures, he'll increasingly want communication independence. And that's the way it goes: I can't force anything—Max has to want it himself in order for it to happen.