Thank you, God, for giving me an obnoxious teenage boy 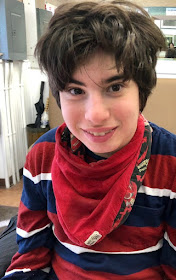 Max got off the school bus yesterday and when I said "Hi, Max!" from the porch he sneered at me. Then he stomped down the walkway and when I gave him a hand to help him up the stairs he pushed it away so he could do it himself, but not before basically hurling his book bag at me.

I had a feeling, God, that you were showing me just how LUCKY I am to have this boy. I mean, would I have believed when he was a tot and first diagnosed with cerebral palsy that he would someday clomp down that path with such 'tude? No, I likely wouldn't have believed it. If someone had told me back then that he would step off the school bus by himself and huffily walk up the porch stairs on his own, I would have been gleeful. If I'd known that one day he would hurl his book bag at me—hurl! With his own two hands!—my mind would have been blown. What feats of gross-motor and fine-motor skills!

Oh, but God, you wanted to make it extra clear just how fortunate I am. Because when I asked Max to sit down so I could take off his sneakers and foot braces, he said, "I hate you!" And I reminded him, as I regularly do, that it's not nice to say such things to your mom. And he said, "I hate YOU!" with extra emphasis on the "you" and I gave him a look and said "I love you." Listen, I tried to have faith when he was little that someday he would be able to talk, but at times I wavered. And now, here was this boy proclaiming "I hate YOU!" Using his words, and enunciating them so clearly! Amazing, right?

Oh, but wait for it (well, you know what happened, of course). When we did his homework together, Max absolutely, positively insisted that the word "sneeze" should alphabetically come before "scam" and when I said "Sorry, that's not correct" he said "You're wrong!" and a few seconds later when he realized I was right he went to change the answer when I wasn't looking but I saw and jokingly said "Aha!" And he responded "I hate you!" And I was soooooooooo sure, God, that you wanted to raise my awareness of just how awesome it is to have a boy who can read and type and take a stand and who possesses that cocky teen arrogance that he is right at all times! While I might have been  anxious about his cognitive impairment years ago, you have made it clear that a person can have intellectual disability and be plenty bright and obnoxious!

And you weren't done yet, God. Because after dinner, when I informed Max that I needed to dash out with his sister for a quick doctor visit to get some testing, he insisted that HE needed to go to the doctor because HE had the sniffles. And then he snorted and pretended to cough for emphasis. And when I said that he didn't need to go to the doctor he glared at me and announced "I'M SICK!" Him giving me a guilt trip: Just, wow. Unbelievable.

Before I left, I pointed out that since he wasn't feeling well, he should go to sleep early. And naturally, God, you had him give the answer that would have me reeling from the wonder of him: "NO!" Actually, it was more like "NOOOOOOOOOO!" so I could get the full impact.

So, in sum, thank you, God. When Max was a baby, and we had no idea what the future held for him, we could have never imagined that what we would get is one obnoxious, cocky, righteous, defiant, guilt-trip-giving, hate-you-mom-spouting teenage boy.

I am a lucky, lucky mom! And I just need to keep telling myself that!
Ellen Seidman at 6:38 AM