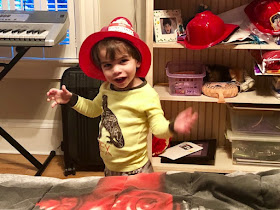 During my pregnancy with Ben, I wondered about several things: How would Dave and I deal with sleep deprivation as not-so-new parents? How would we manage three children? What would happen when Ben got to the inevitable stage of liking fire trucks?

I wondered about the latter only because Max was adamant that he alone could be the only firefighter in the house. "Ben will be a policeman!" he declared on more than one occasion. I understood this, on some level. Max was fiercely proud of his identity as Fireman Max; attached to his impressive collection of fire trucks and firefighter paraphernalia; and possessive about his relationship with our local firefighters.

Well, here's how things turned out: I don't remember much of anything from Ben's first few months, but evidently we all survived; Dave and I are juggling just fine most days or at least parts of most days; and the fire truck thing has, amazingly, worked itself out.

Ben is now into trucks of all kinds. He has assembled his own collection, but of course, likes to play with Max's fire trucks. Max used to say "no" but recently, he's cool with it. At bedtime (Max goes to sleep before Ben does), Ben has been trying on Max's various firefighter hats. Max has also been OK with this.

And then, the other night, Max said, "Ben can be a firefighter too!"

Or at least that's what I thought he said, because I couldn't believe it.

"Did you just say Ben could be a firefighter?" I asked.

He proceeded to note that Ben could work at a different fire station. I said that we'd see how things turned out, because Ben was just a little guy trying out stuff and maybe he would want a different job when he got older.

I watched Ben sorting through Max's pile o' hats. They sit on a bookshelf, right next to an oversized poster of Max featured at a school event when he was around 8.

That Max: He's getting so big. 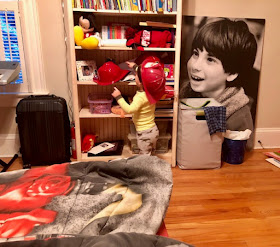