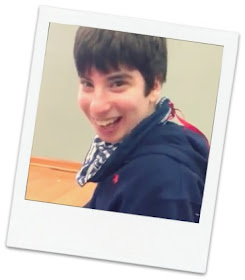 Ben's been going to the same music class that Max went to at his age. Last week, Max had a school break and our sitter ended up taking both of them. She sent me an amazing video of Max.

Max wasn't doing a lot of stuff at two and a half. He wasn't talking. He struggled to grasp stuff. He was not yet walking. Our sitter used to take him to music class, and every week I'd say, "How'd it go?" and she'd say, "He seemed to enjoy himself," she'd say. And I'd ask my questions: Did he make any sounds? Was he able to hold a drumstick? A bell? No, no, no.

Then one week I had the day off from work and I took Max to music class, and saw for myself. Max couldn't hold the instruments. He didn't make sounds. He seemed somewhat interested in what was going on, but not that excited. I sat there holding him on my lap as all the other kids banged on drums and sang or chatted. When it was time to dance, I held him in my arms and danced with enthusiasm I didn't feel. I felt sad for Max that he couldn't enjoy the class. I felt alone as a parent.

As the years went by, the pangs about what Max couldn't do receded. I learned to stop comparing him to other kids and I accepted the fact that he would do what he would do (although any occasion when he was surrounded by typically-developing peers was still hard). When he learned to eat by himself, read, ride a bike, they felt like gifts. When he has not accomplished things, they have not been mourned; I do not expect. This is not to say I do not believe in Max and his abilities, or encourage him—of course I do. I just don't set him (or me) up for disappointment. In other words, better late...or never.

"Never" is not awful. There are plenty of things I'll never do—I'll never be president of the United States, I'll never win an Olympic medal (unless they create one for carb loading), I'll likely never scale Mount Everest. This is OK. I have my talents, same as Max. There are plenty of awesome things I have done, and will continue to do, same as Max. I do not pity him for what he isn't capable of, because there are many things he can do.

I have no doubt that Max will continue to progress and accomplish stuff. Whatever and whenever, it's all good. And so, that video last week. I'd told our sitter to bring Max's iPad to Ben's music class, as I wasn't sure he'd want to join in. And there was Max, shaking one of those little egg rattles like a boss and looking so happy. Thirteen years after he first attended music class, he was having a great time.

And I hadn't expected it.


And it was awesome.